Gives the player an extra life

They are usually found in hidden locations and make their first appearance in the small, rocky hut with a hidden switch in Bob Omb Battlefield.

1-Up Mushrooms are small mushrooms with a beige stem and two beady, black eyes. They have a green hat with white spots.

1-Up Mushrooms have two kinds of behaviours. The first one has them sitting and patiently waiting to be collected, while the second one has them following Mario by sliding around. The second kind of behaviour only triggers, if they have been freed from a yellow [!] block by hitting the block from beneath.

If Mario has less than 99 lives, he can collect a 1-Up Mushroom to gain an extra life.

Other Types of Mushrooms

There is another type of mushrooms:

a green 1-Up mushroom 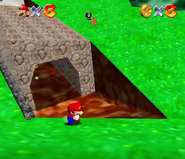 a submerged 1-Up mushroom, as it appears in a small area close to the starting area of Tiny-Huge Island

another 1-Up mushroom, as it appears after freeing it from its yellow [!] box in Tiny-Huge Island

A 1-Up mushroom as seen while running through the Metal Cap-section of Hazy Maze Cave in the original Super Mario 64.

a red or giant mushroom
Community content is available under CC-BY-SA unless otherwise noted.
Advertisement