The Big Steely are an enemy type, that appear in Bob-omb Battlefield, Tall, Tall Mountain, and Tiny-Huge Island.

They are big, black steel orbs, that are about a head taller than Mario. Unlike most other enemies, Big Steelies lack any sort of facial or bodily features.

Big Steelies are found rolling around in small pits (BOB) or rolling downwards on slopes (TTT and THI).

If the player gets hit by one, they will receive a considerable knockback, which is often enough to send them down a slope or off the edge of a nearby cliff.

How to deal with them

Big Steelies cannot be defeated in the N64 version, but Mario can avoid them easily by making a triple jump, a backwards jump, or by simply standing in a place which isn't among their path.

In the DS version, the player can kick them away and break them by running into them while they are a giant. Only Wario can destroy them while not in giant form.

A common theory states that upon the completion of Big Bob Omb on The Summit, the King Bob-omb becomes a Big Steely.

During the player's very first visit to Bob Omb Battlefield, the pit immediately to the right of the gate is filled with two Big Steelies. Upon every other visit (unless the player replays the first mission), there will be three Big Steelies in the aforementioned pit. This theory is backed mainly because King Bob Omb and the Big Steely share the same body model.

A possible, more likely reason for the third Big Steely being there is for a difficulty curve. The programmers might’ve only put two Big Steelies for the first mission to make it easier for new players to climb the mountain. Then, a third would be added to make it slightly more difficult.

This theory has not been confirmed by Nintendo. 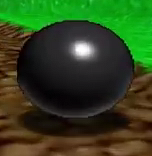 A Big Steely as it appears while rolling down the mountain trail.

Mario and a Big Steely in the sand pit.

Yoshi and a Big Steely as they appear in the DS remake.

Giant Mario walking towards the camera. A broken Big Steely's debris can be seen in the upper left corner.

Mario avoiding a Big Steely as it rolls down from the top of Tiny-Huge Island.
Community content is available under CC-BY-SA unless otherwise noted.