Bob-omb Buddies have the same structure as Bob-ombs, with the only difference being their pink color instead of black.

Unlike the black Bob-ombs, Bob-omb Buddies won't attack Mario, and they subsequently cannot be provoked either. They will simply walk in place. If the player presses the B button, they can talk to the Bob-Omb Buddy.

When talking to a Bob-Omb Buddy, most of their conversations involve the Buddy opening up a nearby cannon, allowing Mario to use it. Sometimes, they will reveal the location of Red Coins in the level, or provide general tips.

In the Nintendo 64 version, Bob-omb Buddies appear in any painting world with a cannon. In the DS version they appear in every level due to the increased number of levels containing red coins.

A Bob-omb Buddy from the original game. 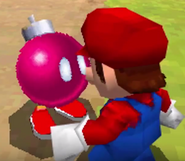 Mario talking to a Bob-omb Buddy in the remake.
Community content is available under CC-BY-SA unless otherwise noted.
Advertisement