Super Mario 64 Official Wikia
Register
Don't have an account?
Sign In
Advertisement
in: Bosses, Luigi and the Forest Ruins, Characters

View source
watch 01:54
Obi-Wan Finale - The Loop
Do you like this video?
Play Sound

Bowser is a large species of Koopa. His skin is mostly yellow, but is sometimes shown as orange in official artwork. His head is colored green and is considerably large. He has a strong jawline, and several sharp, but straight teeth in his mouth. His eyes are red. His eyebrows are large, bushy, and also red. There is a medium amount of red hair on the back of his head, and two ox-like horns on each side.

His stomach is a lighter hue of brown, and what seems to be his abdominals are clearly outlined. Bowser also sports a Koopa shell that covers his back. The claws on his hands and feet are both white. Interestingly, his feet claws are duller compared to his sharp hand claws. Furthermore, Bowser only has 3 toes on each foot compared to four fingers on each hand. He also wears metal bracelets around his elbows and wrists.

In the first game, Bowser's model is polygonal and made up of only a few moving parts - his four limbs, his mouth, and his head. His eyes and eyebrows are also flat textures. In the DS version, Bowser looks much more like he does in his official artwork, and every part of his body is now fully modeled.

Bowser is the main boss of the game; therefore, he only appears three times, each after Mario has collected enough stars on a respective floor.

Bowser is particularly strong and has three distinct attacks:

Bowser in the Dark World

Bowser: "You'll never be able to swing ME around! A wimp like you won't throw me out of here! Never! Ha!"

Bowser in the Nintendo DS remake. 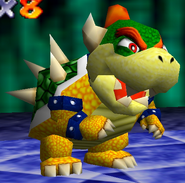 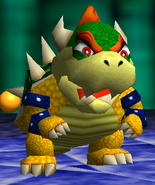 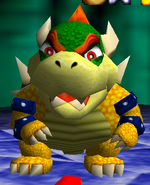 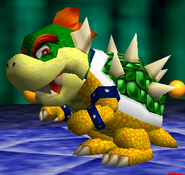 Bowser knowing Mario is behind him.

Bowser takes a deep breath and...

As Bowser said earlier, Mario can grab him by the tail and...

Bowser: "Mario! You again! Well that's just fine..I've been looking for something to fry with my fire breath!"

Bowser: "Your Star Power is useless against me! Your friends are all trapped within the walls..." 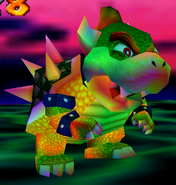 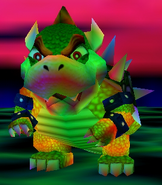 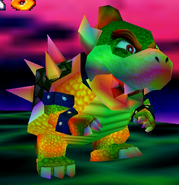 Bowser about to attack Mario. 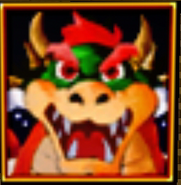 Occasionally paintings of Bowser can be found in the castle. 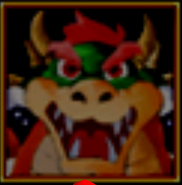 Some of them start out as Peach paintings which transform into Bowser when Mario approaches them, while others stay the way they are (most notable in the room before Bowser in the Dark World).

The Bowser painting at the end of the hallway leading to the third and final Bowser level.
Community content is available under CC-BY-SA unless otherwise noted.
Advertisement