It is almost like Lethal Lava Land except Bowser awaits at the end of the level. When he took away Princess Peach, he flooded the castle basement with lava and set up his base. The player starts on a small platform with a metal platform near it. Stepping onto the metal platform will cause it to move. At certain points, the platform will dive under the lava, so the player needs to jump to nearby tilting platforms in order to avoid taking damage. After the moving platform's stopping point is a series of blue platforms that constantly under the lava, then resurface. Beyond those is a Bully followed by three Goombas situated around a Spinning Heart. A raising pole, circled by an Amp, will help the player reach the tilting platforms above, and the pole at the end of those leads to a cage with an elevator that brings the player up to the next level.

The second level first contains a moving platform that goes through a flamethrower which leads to a sloping mound. After the slope is a hanging grate the player can use to climb to the other side of the lava pool. Beyond that are two moving platforms, followed by a couple of Bullies, and a tall set of moving interconnected platforms with a Keronpa Ball that will lead the player to the next level.

The final level starts with a stone slope, containing a flamethrower, a Bob-omb, and a ! Block. After the stone slope is a row of sinking and rising platforms that are protected by flamethrowers and Amps. Beyond those is a stone structure containing rising and falling poles. Finally, a falling bridge leads to the warp that sends the player to the Bowser fight.

The tactic to defeat Bowser is the same as the fight in Bowser in the Dark World, though he has some additional moves. Bowser will immediately start the battle by jumping up and landing, making the stage tilt toward him. The same will happen if the player throws Bowser off the stage, but misses a bomb, causing Bowser to land and cause the stage to tilt. Bowser can also warp to a different spot if the player is close, and charge at the player if they are far away. Throwing Bowser into a bomb again only once will defeat him, granting the player the key to the castle's upper floors.

Two Power Stars can be collected in this course, with one being exclusive to the DS version of the game.

Like Bowser in the Dark World, there are eight Red Coins to be collected. The Power Star will appear atop a wall shortly before the warp that leads to Bowser himself. Wall-jumping is required to reach it.

Near Star 1 is a Star Switch. Upon pressing the Switch, the Power Star will appear on the far side of a lava pool that the player must quickly backtrack across in order to reach it before it disappears. If played as Luigi, he can spin over the lava to the Star. 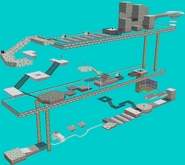