The bubbles are large, blue spheres filled with water. They are transparent, and they are about the same size as Mario. Unlike most other enemies, Bubbles don't have any facial or bodily features.

Behaviour and how to deal with them

The Bubbles are mainly being shot from the cannons scattered around the area near the mountain, which are controlled by black Bob-ombs. Mario cannot be shot from these cannons, as they are always above the ground and there's no way to enter them.

The Bubbles will usually be aimed towards Mario's current location and will drop down from the sky. The player can see the Bubble's shadow briefly before it hits the player, which usually gives them enough time to avoid it via a long jump or by simply running in a zig-zag pattern.

The Bubbles themselves will bounce around a couple of times after hitting the ground (or Mario) and continue bouncing until they suddenly disappear.

Similar to the Big Steelies found in the same area, Mario cannot kill the Bubbles. This remains true even when Mario defeats the Bob Ombs handling the cannons; the bubbles simply keep coming. 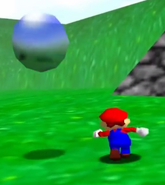 A Bubble as it appears shortly before dropping onto Mario. 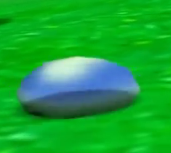 The same Bubble after missing Mario and preparing itself to bounce off the ground.

The Bubble as is continues bouncing around.
Add a photo to this gallery
Retrieved from "https://super-mario-64-official.fandom.com/wiki/Bubble?oldid=8331"
Community content is available under CC-BY-SA unless otherwise noted.