According to Shigeru Miyamoto (the creator of the Mario series), the Chain Chomp was based on a dog, that scared him when he was a child, but the dog was tied to a chain. This also explains why the Chain Chomp makes dog-like barking noises.

The Chain Chomp is a big, black orb like enemy and almost thrice as tall as Mario. It sports two round eyes and a large mouth with sharp fangs. The inside of its mouth has a rose coloration and a human like tongue.

The Chain Chomp only appears in Bob-omb Battlefield and is stuck to a peg guarding a cage with a Star involved in the mission Behind Chain Chomp's Gate. Mario must ground-pound the peg three times to releaae the Chomp. The Chomp will break the cage to release the Star. In the DS version, Luigi can use his invisiblity power to go through the cage and Wario can ground-pound the stake only once because of his weight. During the Silver Stars mission, 5 Silver Stars!, it's freed and and is bouncing around with one of the Silver Stars on the end of its chain. A loose Chain Chomp also appears in the Casstle Grounds in the multiplayer version of Super Mario 64 DS and once again, one of the Stars is atached to the end of its chain.

Similar to a Boo, the Chain Chomp will try to ram into Mario, if he gets close.

If the Chain Chomp's attack is successful, Mario will lose 3 units of health (4 if Mario doesn't have his Cap on), so the player should be especially careful around this type of enemy.

Luckily, the Chain Chomp kind of warns the player before attacking. It will hop around a few times and will start to make a noise similar to scissors cutting through the air. It will make that "snip"-noise about 5 to 6 times before actually attacking, which will give the player time to react. This timer of sorts only counts from the point when the Chain Chomp faces Mario, so any other snipping from the Chain Chomp will be meaningless. This enemy can't be attacked, though if it's hit with a Box or Bob-omb (or Yoshi's eggs in the DS verion), it gets temporarily immbilized. 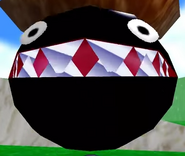 The Chain Chomp jumping towards the screen before jumping again and breaking down the bars, which prevented Mario from getting a Star.

Another image of the Chain Chomp, showing as its seen when Mario runs along the grey stonewalls.
Community content is available under CC-BY-SA unless otherwise noted.