The Chill Bully is a blue/cyan orb like enemy with one golden horn and an angry expression. It has two eyes and two green feet.

Behaviour/How to deal with it?

Besides it's appearance, the Chill Bully behaves exactly the same as the Big Bullies and their smaller counterparts, though in the Chill Bully's case, Mario, Luigi, Wario, or Yoshi have to push it into the ice cold water three times instead of the lava present in Lethal Lava Land. The player has to be careful though, as the icy platfrom the Chill Bully is fought on is slippery and its easy to slide off it if one makes a missstep.

Feel free to read the Big Bully's article for more information on how the Chill Bully behaves and how to deal with. There is a smaller version of this boss, that went unused for some unknown reason, but can be hacked into the game.

The Chill Bully generally appears in ice themed levels, though there are also a lava and another ice base counterpart, the former known as the Big Bully and the latter as Chief Chilly. The with the latter is exclusive to Super Mario 64 DS, a boss that locked Wario. 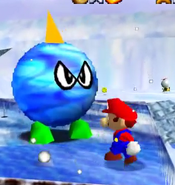 The Chill/Ice Bully, as it appears on an icy platform in Snowman's Land.

Mario fights the Chill/Ice Bully in the mission "Chill with the Bully".
Add a photo to this gallery
Retrieved from "https://super-mario-64-official.fandom.com/wiki/Chill_Bully?oldid=8098"
Community content is available under CC-BY-SA unless otherwise noted.