Chuckyas are large, purple enemies that look similar to Bob-ombs. They have large red spheres on their heads and for their hands.

Chuckyas will start advancing toward Mario, Luigi, Wario, or Yoshi once he comes close. They will then grab the player and spin them around a couple of times, shortly afterwards, the Chuckya will then throw Mario a mild distance, which sometimes unfortunately results in him being thrown off of the level or a high cliff. In the DS version, Yoshi can't defeat this enemy since he can't grab large enemies. 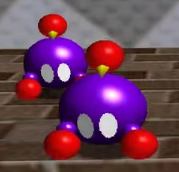 Two Chuckyas, as they appear in Wet-Dry World. 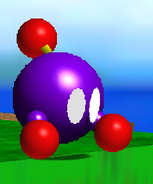 A Chuckya, as it appears towards the top of the mountain of Tiny-Huge Island, when visited in huge mode.
Community content is available under CC-BY-SA unless otherwise noted.
Advertisement