Fly Guys are small, humanoid creatures, that are about one head smaller than Mario. They wear red coats, white masks with two holes for the eyes and blue shoes. It is unknown, what their true appearance beneath the costume looks like. Unlike the regular Shy Guys from the earlier games in the series, the Fly Guys wear a small, cyan, three bladed rotor on their head, which allows them to fly similar to a small chopper.

Ingame, there are two types of Fly Guy behaviours.

The first behaviour has the Fly Guy flying in circles. If Mario draws near, the Fly Guy will stop in mid-air and turn around to face Mario. Then it will swoop down in an attempt to ram Mario. If it succeeds, it will take out two units of health and knock Mario back, so he will likely fall into the abyss, if he is close to one, regardless, if he is on the ground or in mid-jump.

The knock back will be the least when Mario is crawling, increase, when he stands, runs or walks while being hit and is the most, when he is hit in mid-air.

The second behaviour has the Fly Guy flying in a stationary posistion. If Mario draws near, the Fly Guy will stop in mid-air and turn around to face Mario. Then it will start spitting small flames, that follow Mario around for a short time.

If Mario walks into them or is hit, then he will catch on fire and run around with his behind burning. This will cause him to lose up to three units of health, if Mario fails to extinguish himself by jumping into a nearby pool of water in time.

Mario can defeat the Fly Guy by using pretty much any of his jumps or basic attacks. A single hit will take it out, but if the Fly Guy was defeated by jumping onto it, it provide a secondary effect.

Jumping onto a Fly Guy gives Mario an extra boost, causing him to perform something akin to a double jump. At the top of the boost provided by the Fly Guy, Mario will start spinning with his arms stretched out, while slowly descending back to the ground.

Mario can be controlled while spinning, which allows him to reach locations, that would otherwise be impossible to reach without the Fly Guy's involuntary help. (or sometimes also a Koopa Shell)

Coins and Similarities to other Enemies

Once the Fly Guy has been defeated, he will drop two regular coins.

The special effect, that allows Mario to perform a spin jump in mid-air is shared by another, albeit ground based, enemy. This other enemy type is the flower-like Spindrift, which mainly appears in snowy levels like Snowman's Land and Cool, Cool Mountain.

When Yoshi eats a Fly Guy, he can spit a burst of fire at his foes. This is similar to his earlier appearance in Super Mario World, where eating a red shell allowed him to spit out three flames.

Exclusive to Super Mario 64 DS, the Fly Guys are also found in the minigames Bounce and Pounce and Bounce and Trounce.

A Fly Guy as it appears in Shifting Sand Land.
Add a photo to this gallery 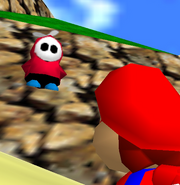 A Fly Guy, as it appears at the beach of Tiny-Huge Island in huge mode in Super Mario 64.

A closeup of the same Fly Guy. It is a swooping behaviour type one and the image shows it after it has turned around to face Mario. 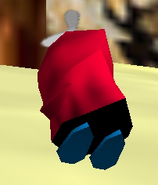 The same Fly Guy as seen from behind as it rises back up into the air, after Mario successfully avoided its attack.
Add a photo to this gallery
Retrieved from "https://super-mario-64-official.fandom.com/wiki/Fly_Guy?oldid=8060"
Community content is available under CC-BY-SA unless otherwise noted.