Jolly Roger Bay is the third main course in the games Super Mario 64 and its remake Super Mario 64 DS, as well as the first of the three water levels in both the games: followed by Dire, Dire Docks and Wet-Dry World. The entrance to the course is through the door to the far right of the first floor of Princess Peach's Castle, up the stairs to the right, and behind the Star door labeled "3", meaning that three Power Stars are required to enter. The course is a large lake with several rocks, platforms, and a pirate ship. "Jolly Roger" is a name given to typical pirate flags. Along with Dire, Dire Docks, one of this stage's most unique features is that another layer of instruments is added to the song as Mario dives in the water, and another as Mario enters the cave. Jolly Roger is also the name given to the typical pirate flags. It is also the name of the infamous pirate ship of Captain Hook, the pirate from Peter Pan. In the same room opposite the painting, there is an entrance to a secret course called The Secret Aquarium.

In this world, there are Bob-omb Buddies, Goombas, a huge eel called Unagi who resides in a cave in the main circular area. There is also a sunken ship, and even a cave that leads to an area where Mario has to guess the treasure chests in the correct order to win a Star.

Star 1: Plunder in the Sunken Ship

Mario will need to dive down to the bottom of the bay to the sunken ship and enter the ship's hatch. Blocking the hatch is Unagi, which will leave if Mario swims to the surface for air or touches the eel. Once it is dislodged, Mario can swim inside. At the back of the ship is four chests which will need to be opened in the right order. If done correctly the ship will rise and drain out the water. The Star is at the ship's bow in a Yellow ! Block, and Mario has to reach it by jumping over the slippery platforms.

This level is basically the same in both the games, however, there is only one chest in the DS version.

Star 2: Can the Eel Come Out to Play?

This level is the same in both games. In order to get this Star, Mario has to get Star 1 first. If he has, Unagi is now inside a small cave and will bite at Mario if he comes too close. When it lunges out, Unagi will swim away, and show a Star at the end of its exposed tail. Mario has to carefully grab the Star, if he touches the eel he will take damage.

This level is the same in both the games. The third Power Star is inside the pirate's grotto which can only be reached by diving through the water. The grotto itself features large pillars that can fall into Mario's direction, as well as a Metal Cap. In order to get the Star of it, Mario has to open the four treasure chests in it in the correct order, as previously with the chests in the sunken ship. In original game, there is a Blue Coin Block in the cave which is essential to collecting the 100-Coin Star. In the N64 version, the mission is called Treasure of the Ocean Cave. In the DS version, the mission is slightly retitled Treasure in the Ocean Cave.

This Star can only be obtained after rising the ship by getting the first Star. Four of the Red Coins are inside clams under water. Three others are on the risen ship, which Mario can reach with special platforms which temporarily appear through a ! Switch on the ground. The final Red Coin is on top of a stone spire which Mario can climb from a platform nearby. The Power Star itself appears on the ship when Mario has collected all the Red Coins.

In Super Mario 64 DS, this level is the same, however, it has been swapped with "Blast to the Stone Pillar", so that it is Star 5, not Star 4.

Star 5: Blast to the Stone Pillar

The fifth Power Star is on a ledge on the other side of the bay from Mario's starting position. Next to it is a stone pillar Mario can climb. In order to get to it, he first has to find the Bob-omb Buddy on a different platform and use the cannon to hit the pillar and reach the ledge. The Star is inside the yellow ! Box on the ledge. In the Japanese version, the Star is out in the open.

In Super Mario 64 DS, this level is the same except for the fact that the Star isn't in the yellow ! Box, mimicking the original, Japanese N64 version. Also, Stars 4 and 5 are swapped in the remake, so this level is actually entitled "Star 4: Blast to the Stone Pillar", and comes before "Star 5: Red Coins on the Ship Afloat".

In Super Mario 64, Mario needs to become Metal Mario to get the Star inside at the bottom of the bay. Mario should use the Metal Cap near the ship and long jump in the middle of the bay. Another method is to use the Cap in the cave.

In Super Mario 64 DS, the Star is only obtainable by Wario, because he is the only character in the game that can use the metal ability when getting a Power Flower. It was also moved to Star 7. It's also possible to get the Star without the Metal Cap, although, the current must be entered at a right angle to avoid being blown away. This is only possible in the original game.

Super Mario 64 DS added an extra mission to Jolly Roger Bay. In it, Luigi must step on the Star Switch in the Pirate's Grotto, making a Power Star appear behind the cage on the other side. He will then need to grab a Power Flower in the process, which will turn him invisible, so that he can go to the cage and grab the Star.

Another image at the beginning of the course.

Mario diving to the sunken ship. A giant eel's head can be seen looking out of the ship. Mario has to enter through the same hole after luring the eel away. 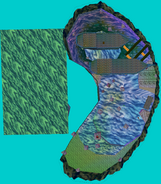 Overhead view of the area in Toad's Tool. As the program doesn't render water, the area seems more barren than usual.

If viewed in Toad's Tool, one can see all three positions of the pirate ship at the same time. These are from different missions, but will all be loaded at the default settings.

Mario has to open these boxes in the correct order to release the water.

After opening the boxes, he needs to quickly swim to the highest platform.

Mario standing on a high platform, watching the rest of the water drain away.

Mario gets a power star after breaking the Yellow ! Box.

The indoors area without water. This is how it appears in Toad's Tool.

The full model of the indoors area. When viewed in Toad's Tool, a model of the pirate ship becomes visible, that is normally impossible to see ingame, as the player can't leave the ship after entering it.