Koopa Troopas are human-sized, orange tortoises with green shells and large, white eyes with black irises. They are bipedal and wear green shoes with white soles.

If a Koopa Troopa spots Mario, it will give him a shocked look and start escaping by running away from him. Once the distance between the Koopa Troopa and Mario is far enough, the Koopa Troopa will return to its normal behaviour, which has it simply walking around at a slow pace.

The shell can then be used by Mario to surf on water, cliffs, and various hazardous surfaces.

Then Koopa Troopa will try to chase after the shell acting scared. When it's near the shell, it'll slide on the ground, recheving its shell.

You can also jump on and defeat Koopa Troopa when the shell is off (just like the Goombas). Once it's gone, a Blue Coin bounces out.

There is also a friendly Koopa Troopa ingame, which is known by the name of Koopa The Quick. He is larger than other Koopa Troopas and won't escape when he sees Mario, but instead can be talked to, which will trigger a dialogue, which allows Mario to race with him. In the DS version, he'll only allow Mario to race him. Other characters must grab a Mario Cap if they want to race with him.

A Koopa as he appears in Bob-omb Battlefield. 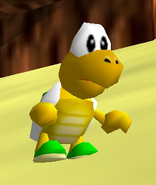 A Koopa as he appears at the beach of Tiny-Huge Island, when visited in huge mode. 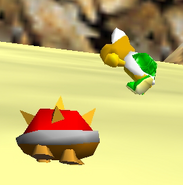 The same Koopa fleeing from Mario, while a Spiny carelessly walks past him.
Add a photo to this gallery
Retrieved from "https://super-mario-64-official.fandom.com/wiki/Koopa_Troopa?oldid=7933"
Community content is available under CC-BY-SA unless otherwise noted.