Lakitu is a character from the Super Mario series.

While Lakitu used to be an enemy in the earlier installments of the series, Super Mario 64 and its remake introduces him as a cameraman.

Another version of Lakitu also appears a minor enemy in some levels.

He posesses an orange-yellowish body and a green shell. The character has cartoonish, white eyes with black irises, with the eyes themselves being remniscent of glasses, as seen in later entries in the Super Mario series. Lakitu mainly moves around by using a cloud as his mount, which, unlike in other entries from the series, is depicted without a face in Super Mario 64 and SSuper Mario 64 DS.

Lakitu introduces Mario,Luigi, Wario, and Yoshi to the mechanic of switching through different camera angles. Lakitu's camera also acts as the player's perspective of the world, as players see Mario's world from Lakitu's view in the Lakitu camera mode.

It is also possible to switch to a first person Mario camera, but it makes the game's difficulty spike and is more useful for viewing the surroundings than actually playing the game. 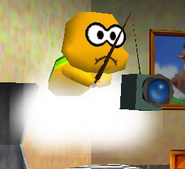 Lakitu can be seen...

...in Peach's Castle.
Community content is available under CC-BY-SA unless otherwise noted.
Advertisement