Were you looking for the friendly Lakitu instead?

They posess an orange-yellowish body and a green shell. They have cartoonish, white eyes with black irises, with the eyes themselves being remniscent of glasses, as seen in later entries in the Super Mario series. The Lakitu mainly move around by using a cloud as their mount, which, unlike in other entries from the series, is depicted without a face in Super Mario 64 and Super Mario 64 DS.

Behaviour and how to deal with them?

Once Mario, Luigi Wario, or Yoshi approach this foe, the Lakitu will start hovering in the air above them and usually out of reach. After a short time, it will start throwing Spinys at them.

If the player moves, the Lakitu will aim its throw to the place, where the player is going to be, so the player has to avoid the Spinys thrown by Lakitu by running in a zig-zag pattern.

If the player is hit by a Spiny or walks along these small, red, hedgehog-like beings, he will lose 2 units of health, making both Lakitu and his Spinys a threat.

Lakitu can be defeated by doing a backwards sommersault and landing on top of him. Doing so will make Lakitu and his cloud disappear in a poof of smoke, only for him to leave behind three Coins.

The Spinys will keep on moving around even after their Lakitu is defeated and can't be harmed. They also will still hurt Mario, if he makes contact with them. 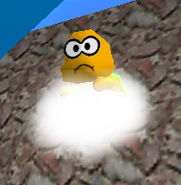 An Enemy Lakitu, as he appears at the beach of Tiny-Huge Island, when visited in huge mode. 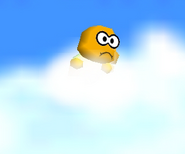 Another image of the same Lakitu.
Community content is available under CC-BY-SA unless otherwise noted.
Advertisement