Lethal Lava Land is the seventh main level in Super Mario 64 and its remake Super Mario 64 DS. As the name suggests, it is a course completely filled with lava. There are many traps in the course compared to most of the previous levels. The primary enemies in the stage are the Bullies, which, true to their name, try to push Mario into the lava surrounding their platforms. There are also Fire Bars, Mr. Is, and many Lava Bubbles that jump out of the lava and bounce on the floor. Unlike in most other Mario games, the lava does not immediately defeat Mario; instead, it depletes Mario's health by three. If Mario does not have his Cap on and touches the lava, he instead loses four points of health and sends him flying around. Being burnt while on a flat surface causes Mario to run around erratically. Fortunately, there are no bottomless pits in the stage to instantly kill Mario.

Highlights of this stage include a sliding puzzle that forms a picture of Bowser, many tilting platforms which can easily dip Mario into lava, and a rolling log along which Mario must run on. Most notable is a volcano in the center of the stage. In the DS version, Power Flowers can save Wario from taking damage in the lava in this stage. Instead, Metal Wario gradually sinks into the lava as he walks along it and must continuously jump to keep on the surface, similar to parts of Shifting Sand Land.

The entrance to Lethal Lava Land is a painting of Bowser's face made of lava, and it is located in the basement of Princess Peach's Castle. The theme played in Lethal Lava Land is shared with Shifting Sand Land. In the remake, it is the only main course where all the four characters can obtain any Power Star, as well as the only main course that allows Mario to obtain both his Power Flower and flying abilities without having to go anywhere else. Also in the remake, if Wario breaks a Black Brick Block near the ! Block, it will reveal a Blue Coin block which he can ground-pound and then use a Koopa Shell to collect a line of Blue Coins lined up on the lava.

This level is the same in both the games. After Mario enters the stage, he needs to go up to the northern end of the stage across bridges, Fire Bars, and the Bowser puzzle. Mario should then see a large Bully on a square platform across the area. Using a variety of punches, kicks, and other attacks, Mario will be able to push the Big Bully off the arena and into the lava. The Power Star will appear atop another platform, and a set of steps (which will break apart) will also appear, leading the plumber to it.

This level is the same in both the games. Mario should head to the right of the site of his battle with Big Bully. He will see a larger platform with three regular Bullies, named Moe, Joe and Larry. With his punches, kicks, and attacks, the plumber can easily defeat Moe, Joe, and Larry. After defeating the trio, a Big Bully will drop down and fight Mario. After pushing it into the lava below, the Power Star will appear in the center of the platform.

This level is the same in both the games. Here, Mario should head straight until coming up to a bridge that he will then cross. Then, Mario needs to go left again and cross another bridge that opens and closes repeatedly, giving Mario a chance to fall off. Heading right afterwards, Mario should see platforms with a picture of Bowser on it. The pieces will shift around and Mario will have to collect the eight Red Coins above them while avoiding falling into the lava. The Power Star will appear above the Star Marker on the nearby stone platform in the northeastern corner of the puzzle. Compared to the real Bowser, the Bowser picture on the puzzle more closely resembles his common design. The Bowser picture on the matching puzzle in the original Super Mario 64 is Bowser's artwork from Super Mario Bros. 3 and was seen again in the Bowser's Castle level of Mario Kart 64. The picture in Super Mario 64 DS was later used in Mario Party 7.

This level is the same in both the games. Mario will need to travel to the right of the volcano in the center of the stage. There will be a platform with two bullies. Mario will then have to go across the platform on the side, avoiding flames shooting out of the fire. He will then be near a large log that he should stand on, causing it to spin. Mario will need to keep his balance and cross the log and then go left across a narrow pathway to reach the Power Star. Mario can also grab the Koopa Shell to ride or Wing Cap power-up and use it to fly over, or around the fence and land on the platform with the Star. In the DS remake, the player can simply skip the log by doing a backflip as Luigi and heading to the Star.

Star 5: Hot-Foot-It Into The Volcano

This level is the same in both the games. To get this Star, Mario must jump in the volcano located in the center of the stage. Inside, there are many black islands. Mario must go across them until he gets to the walkway that follows the circumference of the volcano's interior. On the way up, there are some Bullies to push Mario off, leading him to a possible death. Also, one part of the wall can fall and crush Mario if he isn't paying attention. Later on, there is a section with floating platforms. Mario needs to jump on each one to effectively reach the athwart positioned allocation, where he will find poles leading to the Star. Carefully, Mario must jump pole-to-pole without missing. If he makes it, the Star will be waiting at the end of the walkway.

To get this Star, Mario must jump in the volcano at the center of the Lethal Lava Land stage. He must then continue left from inside and then jump onto the elevator. He will be sent up but will then have to jump on another elevator and ride on that one. The elevator will, at some point, fall down, and Mario will have to jump on the platform to his left before falling. Rotating Fire Bars are found on the platforms, and Mario must quickly climb up a pole onto another platform with rotating Fire Bars, followed by three very small platforms to jump across. After the three platforms are passed, Mario can grab the Star on the last platform.

In Super Mario 64 DS, the mission is the same as in original game; however, it is renamed Inside the Volcano and lacks the Fire Bars.

Super Mario 64 DS adds a seventh mission to Lethal Lava land. In it, five Silver Stars are marked on the player's map and must be collected to produce a Power Star. Mario or one of his accomplices must run across the first platform and past the archway, where a yellow "!" block will give them a green Koopa Shell to ride on. While riding on the shell, the characters are impervious to the lava below them, giving them free-range over the level and easy access to all five Silver Stars (so long as the characters do not bump into anything). When all five Silver Stars are collected, the golden Power Star will appear on the rock formation behind the level's start.

A volcano is located in Lethal Lava Land in both games. It appears to be the source of much of the lava in the course. It is possible to jump inside the top of the volcano to access a hidden area of the level. The volcano's interior houses the two final Power Stars needed to complete the level. It has Lava Bubbles, Bullies, Fire Bars, and walls that shoot fire. If the player loses a life inside the volcano and they go back into the course, they will be back in the volcano.

The volcano's diminutive outer appearance betrays its massive interior. The entire "floor" is a pool of magma, which is fed by an enormous "lavafall" at the back of the volcano, but there are several black stone islands that Mario can stand on. There is also a ledge that runs along the wall to the top of the volcano. Bullies patrol the ledge, and the walls shoot fire. There are also some Fire Bars and Lava Bubbles. One section of the wall even falls open, crushing Mario beneath it. Suspended high in the air in the middle of the volcano is a floating platform that can only be reached by an elevator.

At the beginning of Lethal Lava Land.

Section after crossing the first gap.

There's a cage with two Mr. I enemies on top of it.

After leaving the section with the two Mr. I enemies, Mario comes across a bridge with two bullies.

A distant location in the same level, while surfing on a Koopa Shell 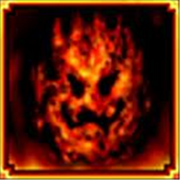 The painting of the level. 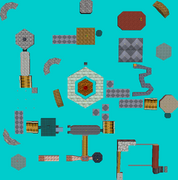 Overhead view of the outdoors area created in Toad's Tool. Note, that the lava doesn't render in this tool, which is why it is absent.

Side view of the complete outdoors area created in Toad's Tool. Aside from the lava being absent, the area is rendered as it is seen in the game. 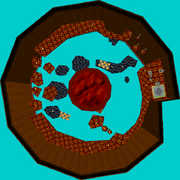 Overhead view of the area
inside the volcano created
in Toad's Tool.

A part of the path, that Mario has to take to reach one of Lethal Lava Land's power stars.

Mr.I, an enemy that appears in the level.

A bully as it appears in the "Bully the Bullies"-mission