Charles Martinet
Danny Wells(DiC cartoons)
Luigi is Mario's younger twin brother. He is a secondary protagonist in many Mario games, and is also one of the three unlockable protagonists of Super Mario 64 DS.

Luigi is a tall Italian man whose physique is skinny and lean. This is a stark contrast to his brother Mario, who is shorter and slightly plump. Luigi wears a long-sleeved green shirt underneath his blue overalls, and he also wears the same white gloves and brown shoes as his brother. His hat is also green, sporting the letter "L" in his namesake.

His facial features are different compared to Mario's. His eyes are the same shade of blue, but his eyebrows are much more slim. His hair is also the same hue of brown, albeit it is slightly shorter in length compared to Mario's. Luigi's nose is also slightly larger and longer than Mario's. The most notable difference is Luigi's mustache, which strongly resembles stereotypical French mustaches, in comparison to Mario's bushy one.

In 2000, a rumor spread up on SM128C.com. It stated, that the statue in the fountain had a secret message reading "L Is Real 2401" or "Luigi is Real February 4th, 2001". Although the rumor had been spread earlier, the site was the first major source to mention it. Actually, February 4th, 2001 is the date the last Nintendo 64 game, Paper Mario, came out. In this game, Luigi is existant.

Despite the rumors, no matter what players do, without hacks, having Luigi in Super Mario 64 and thus playing as him is impossible. Nintendo even revealed that the developers were planning to put Luigi in the game, but due to the Nintendo 64's technical limitations, the man in green was "asked to leave".

In 2020, a Nintendo source code leak occurred, bringing a plethora of content from a beta build of Super Mario 64. Amounst this content found was an official Super Mario 64 model for Luigi, including textures and even voice lines.

Since the N64 version was so successful, a sequel was planned for the Nintendo 64DD (64 Disk Drive) in 1999, titled Super Mario 64 2. The game was intended to have a two-player multiplayer game and Luigi was planned to appear in it. However, since the 64DD was a commercial failure, the game was cancelled.

In Super Mario 64 DS, Luigi is one of the characters trapped by Bowser's minions, along with Mario and Wario. Luigi is trapped by King Boo and Mario is needed to rescue him. Once Mario has 15 Power Stars, he can enter Big Boo's Haunt and go into the Luigi painting Big Boo Battle go through the doors where he hears King Boo's laugh, and defeat King Boo to free his brother. Luigi is needed to free Wario. Luigi must go into the mirror room with the Snowman's Land painting grab a Power Flower to go through the cage and enter the Wario painting, Chief Chilly Challenge. Once Luigi goes through the course and enters a hole, he must defeat Chief Chilly Challenge to rescue Wario. Like Wario, Luigi is optional to find. He has equal power to his brother but moves a bit slower when carrying enemies. He has the fastest running and swimming capabilities and can scuttle-jump, which is similar to Yoshi's flutter-kick, but a bit lower. He can somersault and eve run on water briefly. When Luigi gets a Power Flower, he can turn invisible and walk through certain objects and enemies and won't get hurt, similar to Mario getting a Vanish Cap in the original. However, unlike Vanish Mario, Vanish Luigi can't go through the ice.

A thing to note about him is that unlike the other characters, he has a special backflip move that makes him spin around in the air and glide as if he jumped into a Fly Guy. Expert players often exploit this technique to grab Power Stars that are usually hard to get, like Blast to the Lonely Mushroom and Mario's Super Wall-Kick. 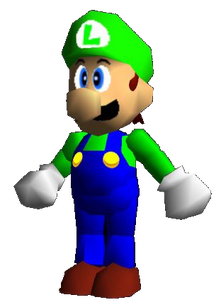 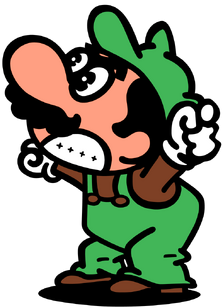 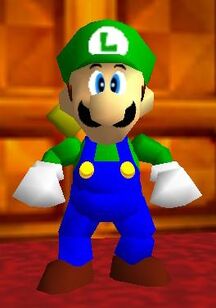