Mario is the main character and protagonist of the long-running and highly successful Mario series, along with his younger brother Luigi and a playable character in Super Mario 64 and Super Mario 64 DS.

Mario is a human plumber, who wears a red long-sleeve shirt, blue overalls, and brown shoes. His most striking and famous clothing is a red cap labeled "M" on the top of his head. If Mario loses his Cap in Super Mario 64 or Super Mario 64 DS, he is revealed to have brown hair. He also sports a black, bushy mustache.

Mario receives a letter from Princess Peach, who has baked a cake for Mario. Mario then heads to Peach's castle, where he realizes that Peach and several Toads were captured by King Bowser. Mario must make his way through the castle while fighting bosses and collecting the lost Power Stars. After saving Peach, he receives a kiss from her and his cake from the letter.

In the remake, Mario is captured by Goomboss, whom Yoshi must defeat so that Yoshi can rescue Mario, while Mario is needed to rescue is brother from King Boo. Mario is a special character, as he is the only character that can wall-jump and use the Wing Cap in single-player mode. He's the most balanced of the four characters and plays the same way he did in the original game. He's the main character since only he can complete the final Bowser level.

This section describes the ingame controls when playing as Mario in Super Mario 64.

If the player moves the control stick

in a direction they want Mario to go, he will move into that direction at a speed equivalent to how hard the player moves the control stick.

Pushing the control stick to another direction while Mario is running, will cause him take a swift turn to the left or right (depending on what direction he the player presses), run in circles or skid and turn around.

If the player presses the crouch button

, Mario will go into a crouching position with his hands over his head.

If they keep it pressed and use the control stick

along with it, Mario will crawl around like a baby, which allows him to climb some steep slopes, he can't climb by walking or running normally.

If Mario walks or falls into the water, he will float in it. Pushing the control stick

will make Mario face in the corresponding direction, but he won't move yet.

To swim, the player has to press the jump button

If the player keeps the jump button

When Mario is close to the surface and the control stick isn't being pressed into a direction that makes Mario face the water, he will make a small jump instead of swimming.

If the player presses the attack button

instead, Mario will attempt to grab whatever is in front of him.

Be careful as Mario's health will slowly deplete while he's submerged. Resurfacing before it runs out will save Mario, otherwise he will drown and lose a life.

As Mario's health meter doubles as his air meter ingame, the swimming feature can also be used to refill Mario's health. If he submerges for a short time and then goes back to the surface, his health will be refilled to its maximum, making taking a short dip into the water an alternative to collecting coins or using the spinning hearts.

Not only is Mario well known for jumping, there's also a jump-button ingame

Pressing it while Mario is standing, sneaking, walking or running, will cause him to jump. Pressing it a second time shortly after the first time, will cause Mario to perform a second, higher jump.

If Mario presses it a third time, he will start over doing the first jump again, if he's standing, sneaking or walking. If he does this while running, he will do a really high jump.

Mario will do a backwards flip.

If Mario jumps towards a wall while doing his running jump or backwards flip and the player continuously presses the jump button while Mario is close to a wall, he will do walljumps, allowing him to reach higher areas, otherwise unavailable to him.

But be careful as the player needs to angle Mario properly, or he might jump away from the wall and fall down again, getting himself hurt once he lands or falling into the bottomless void, losing a life. (or ending up in any kind of other harmful place)

Later areas ingame require the player to use both the basic and the advanced jumping techniques, so be sure to practice them.

If the player presses the attack button

If Mario punches or kicks while he's in front of an indestructable object or a wall, he will receive a small knockback (by bouncing off) as he hits the object or wall.

and then presses the attack-button

while Mario is jumping, Mario will do a kick in mid-air.

This allows Mario to hit airborne enemies like the Fly Guy or kicking away the head (if well timed) or a spiked blob of a Pokey.

Mario can't change directions while he's kicking in mid-air and will end up free falling after doing the kick. From this point on, the player won't be able to do little more than slightly moving Mario into a desired direction by holding the control stick into that direction.

Mario can't attack or jump while free falling, but he can grab onto ledges in front of him. Keep in mind this only works if they are in front of Mario and he passes them at the right time. Otherwise he won't grab onto the ledge and will keep falling.

Mario can also use the jumping kick as an advanced jumping technique, that, if used with precice timing and rhythm, allows him to climb even steeper slopes than the baby crawling. This requires a lot of timing, but might save one or another of Mario's lives.

and then presses the attack-button

and the control stick

forward while Mario is jumping, Mario will throw himself forward at a great speed.

If Mario hits a lesser foe while doing this, he will grab the foe and will hold it. This also works when trying to catch MIPS the rabbit, who is a harmless NPC that gives Mario a star.

Whenever Mario does the forward charge, he won't be able to change directions or grab onto ledges, so be careful when using it.

Chuckyas, King Bob-Omb and Bowser will still grab Mario if he forward charges into them head on, but if he gets them from behind, he will lift the Chuckya/King Bob-Omb or grab Bowser's tail.

Mario can also do the forward charge by running forward and pressing the attack-button while running, which will make Mario slide on the ground. This is especially useful against the aforementioned foes and when playing the racing courses to gain a head-start. But be careful as his faster speed will make Mario harder to control and racing thus more dangerous, as he will be more prone to falling off the race-track.

Mario can also use the Forward Charge to take out the head or a blob of a Pokey, but be careful not to slide into the Pokey, which will hurt Mario instead.

and then presses the crouch button

Mario will do a ground pound, flattening enemies when he lands on them. This move is similar to the one from the Yoshis of Super Mario World 2 - Yoshi Island and seemingly based on the one from the older game.

If the player presses the crouch button

keeps it pressed and uses the attack button

, Mario will do a breakdance kick, which has him holding himself up on his hands while doing a little dance while sitting in place.

This hits any ground enemy close to Mario and in a full 360° degree, but it has a very short range and deals little damage, so it's mainly useful when being cornered by Goombas.

Mario as he appears in the Nintendo 64 version.

Mario in a drowsy state.

Mario making a victory sign after collecting a Power Star. 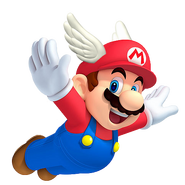 An official artwork, that depicts Mario flying while wearing a Wing Cap.

Metal Mario as he appears in Super Mario 64.
Add a photo to this gallery

Retrieved from "https://super-mario-64-official.fandom.com/wiki/Mario?oldid=7876"
Community content is available under CC-BY-SA unless otherwise noted.