The Metal Cap is one of the three Caps in Super Mario 64. Mario activates them by hitting a Green ! Switch in Cavern of the Metal Cap, a secret course found within Hazy Maze Cave. Once he steps on the Green ! Switch, they will appear on every Green Block that he finds.

It is mainly found by jumping into Green [!] Blocks and looks Mario's regular Cap, but with a metallic texture applied to it.

Effects of this Cap

Upon collection, Mario will put on the Metal Cap and turn into Metal Mario. With this cap, his weight and physics will be altered and he will be mostly invulnerable.

As Metal Mario, Mario is immune to the toxic gas in Hazy Maze Cave, can't drown and can't be harmed by lava. He also can't be blown away by Fwooshs, but unfortunately, the price for his borderline invulnerability are, that he can't perform any jumps beside the regular one and the backflip while in this state.

On land, he will become very slow and he can't swim, but when he is submerged, Metal Mario's physical will behave similarly to regular Mario's on land physics. While this allows Metal Mario to press submerged switches, which no other form can, he is susceptible to bottomless pits and quicksand, as Metal Mario sinks faster due to his increased weight. These will end Mario's life even if he is in his Metal Mario form.

Just like with any other Cap, Mario will turn back into his regular state once an unseen timer runs out.

In Super Mario 64 DS, the Green ! Switch and Metal Cap do not appear. Instead, when Wario grabs a Power Flower, gains the same abilties as Metal Mario.

Blocks and the Switch 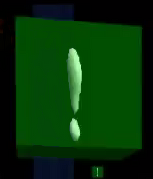 A Metal Cap block as it appears before its activation. 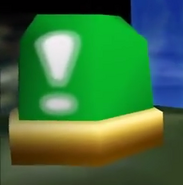 The Green Switch, that needs to be pressed to activate the Metal Cap blocks.

An activated Metal Cap block after pressing the Green Switch.

Metal Mario and the Metal Caps 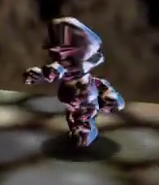 Metal Mario as he appears in the green switch's Hazy Maze Cave section before activating the Green Switch.

The Metal Cap as it appears while rotating in place after spawning from the Green [!] Block in Dire, Dire Docks.
Community content is available under CC-BY-SA unless otherwise noted.
Advertisement