Princess Peach, also known as Princess Toadstool is the damsel-in-distress, the main female protaganist in the Mario series, one of Mario's and Luigi's love interests, and a rewarder in Super Mario 64 and Super Mario 64 DS.

Peach is a somewhat tall, blonde haired woman. She wears a pink dress with a jewel at the top of here dress. She wears a crown with a red, blue, and green jewel. She also wears white gloves.

Role in the Super Mario 64 series

Princess Peach was captured by Bowser and trapped inside the castle walls. If Mario, Luigi, Yoshi, and Wario make their way throughout the castle, re-collect the Power Stars, and defeat Bowser, Peach is freed from the walls and the game is over.

In both of the games, Peach is unplayable.

Peach as she appears in the intro

Peach, as she appears in the intro of Super Mario 64 DS alongside her letter.

Peach as she appears in the ending

Peach comes out of the glassed vase. 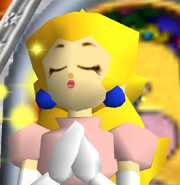 The final star turns into Peach, who is accompanied by two Toads.

Peach blinks a few times. After that...

...she thanks Mario for recovering all 120 Stars and saving her and...

...gives him a well deserved kiss.

At the end, Mario, Peach and the two Toads wave the player goodbye.

Lakitu also leaves the party and the screen. 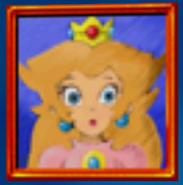 Occasionally paintings of Peach can be found in the castle.

Some of them transform into Bowser paintings while others stay the way they are.
Community content is available under CC-BY-SA unless otherwise noted.
Advertisement