Note: As this is the hub level, there are multiple floors, leading to other locations.

On the east end of the area is a grassy patch with several trees. There is also an inclined ramp here that allows exit from the moat. To the west is a secret hole that leads to Vanish Cap Under the Moat. This can only be accessed once the moat is drained.

The roof of the castle is built of red brick, but only the flat part of it can be visited. Behind the main tower is Yoshi, who will give Mario the ending message and max out his lives to 100. The roof is supposed to be reached after the lake cannon is unlocked, but it can be reached at any time through glitches. There is also a red box with a Wing Cap.

Upon entering from outside, the main lobby is a big room with 3 stairs: one larger set in the middle and the other two on each side. In the center of the lobby is an octagonal rug with a symbol of a purple, red, and yellow sun. A bright light from the ceiling shines onto this platform, and when looked directly at, leads to Tower of the Wing Cap. To the left is a door leading to a square room with Bob-omb Battlefield. To the right is another door on the main floor that goes to a long room leading to Cool, Cool Mountain. On the opposite side of the floor are both the Whomp's Fortress room and the aquarium. The aquarium is larger than the other rooms and contains various water tanks and the pathway to Jolly Roger Bay, as well as a secret alcove leading to The Secret Aquarium. Immediately to the side of the main staircase are two darker doors leading to the back hallway, as well as two raised platforms that contain two Coins each.

On the balcony of the main staircase are two paths. The left path leads to a mechanical star door, which leads to a long, straight hall with a painting of Princess Peach at the end. When Mario gets closer to the painting, it will morph into Bowser. A trap in the floor prevents Mario from reaching the painting and leads to Bowser in the Dark World. The right pathway leads to a smaller room with three stained glass pictures of Peach, one of which leads to The Princess's Secret Slide.

The main lobby itself is bright and cartoony; the walls are colored green, baby blue, and dark blue from bottom to top, representing the sky above a meadow. Drawings of clouds with eyes also adorn the upper walls. The inside of the adjacent rooms are less detailed, with cream colored walls and red or black/white marble floors. The aquarium itself has walls similar to the lobby and is darker.

If Mario enters the back hallway doors from the lobby, there will be a longer hall leading towards the courtyard and a staircase leading to the basement. The basement landing contains a raised platform with marble floor, as well as another mechanical star door. Nearby, there is also a slide blocked by a glass structure. The star door leads to a long hallwa with a mysterious blue wall that leads to Dire, Dire Docks and a hole leading to Bowser in the Fire Sea.

At the end of the hallway in the landing is a door leading to what seems to be the basement cellar. The cellar is partially flooded with a purple liquid, and the walls are now built of dark green bricks and adorned with torches. The cellar is mostly linear. The front end of the cellar contains a fire painting leading to Lethal Lava Land. The hall going to the left contains what seems to be a dead end, but is actually home to a hidden painting leading to Shifting Sand Land. Immediately to the right of the fire painting is a door leading to a large, square room. A set of stairs goes to the bottom part, which contains a hole leading to Hazy Maze Cave.

To the south of the Hazy Maze Cave room is a door leading to the second half of the basement. Here, there is a large room with a drop to the east, as well as a staircase. This staircase leads to a door which in turn goes to the slide behind the glass wall from the first room. Inside the drop is an underwater area leading further through an eastward tunnel, until the player reaches a small room where they can resurface. In this room, there are two pillars, which, if the player ground pounds them, can allow the water inside to be drained. However, it also drains the entire moat outside of the castle. A nearby door leads to the moat.

The basement in its entirety is less stellar than the ground floor, but generally looks similar.

The upper floor can be accessed upon retrieving the key for the door at the top of the lobby staircase. The pathway to the upper floor consists of a narrow spiral staircase. Upon reaching the top, the door leads to a donut-shaped room that loops around. The donut room is adorned with many paintings that are replicas of the ones seen on the first floor. However, two of these paintings can be entered. The large painting with the Skeeter on it leads to Wet-Dry World, while a smaller painting with mushrooms leads to Tall, Tall Mountain.

To the west is a door that leads to a cross-shaped room with three paintings, each of which shows two Goombas next to each other. One side of the room gets gradually smaller while the other gets gradually larger; both of these paintings lead to Tiny-Huge Island, while the middle one does not.

Opposite of the Tiny-Huge Island room is a more decorated door leading to a bigger room with a mirror. This room contains many stone pillars. The player can also see Lakitu's reflection in the mirror. To the west is another invisible painting, this time leading to Snowman's Land. The mirror cannot be passed through in the original game, but can in the DS edition (see DS changes).

Opposite the entrance door is a staircase leading to a third mechanical star door. Behind this door is a large circular room. The walls are darker and adorned with stars, showing off a nighttime theme. A half-moon staircase is behind the door on both sides. On the east and west end of the room, there are two alcoves which can only be reached through triple-jumping. The left alcove leads to Wing Mario Over the Rainbow, while the right alcove leads to Rainbow Ride. On the front wall is a large clock with green decor that resembles a tree. Jumping into the clock face leads to Tick Tock Clock.

The staircase leads to another star door, which in turn leads to the final staircase. This staircase will loop endlessly unless Mario has the required amount of stars, which is seventy. At the top of the endless stairs is a Bowser painting and a hole leading to the final level, Bowser in the Sky.

The lower half of the upper floor is aesthetically similar to the ground floor, while the uppermost area is darker and more symbolic of the game's grand finale.

The courtyard is entered through the back hallway. It is a square garden that contains a large fountain in the middle, and two grassy areas to the side. The courtyard is infested with several Boos. To the right of the fountain is a larger Boo; defeating this Boo will reveal a cage which leads to Big Boo's Haunt.

The DS edition added a lot of new areas to explore as well as different features and map changes.

The west patch of grass now contains a garden. There are white colored rabbits in here, one of which contains a key that allows Yoshi to enter the castle at the beginning of the game.

On the west edge the moat, there is a new, steeper staircase that can be used to get in or out.

The roof now longer contains Yoshi, since he is now a playable character, but rather a set of 1-Up Mushrooms.

The room that contained the Secret Slide has been refurbished and is now the character selection area. There are four doors for each of the characters, and a matching letter above all except for the white one. The slide can still be accessed through a stained window.

Very few changes to the basement have been made besides graphical updates.

The previously unreachable half of the mirror room containing Snowman's Land can now be accessed by Luigi by using a Power Flower. The right side of the room contains a painting of Luigi which leads to the Big Boo Battle. The door on the opposite side of the mirror can be entered, leading to a completely white room with a star. There is also a painting of Wario next to Luigi's which leads to the course with Chief Chilly.

If you look at the castle in Mario View and switch back to the Lakitu Cam, the ground might glitch out. This makes you able to look through the ground for about a second.

Mario standing at the place where the game starts after loading a save.

Mario flying around Peach's Castle exterior with the Wing Cap. Red Box can be found on the roof. It contains the Wing Cap.

The roof can be reached by using a cannon near the lake. If the player has 120 Stars, Yoshi can be seen walking around on top of the roof.

If the player talks to Yoshi, he will give you lives until you have 100 lives.

The castle exteriors as seen in the game's ending. 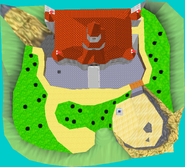 Overhead view of the castle grounds

The castle courtyard is a seperate ingame area of the castle exteriors, which can't be reached from the castle grounds. Mario needs to go through a long corridor housing a friendly Big Boo to reach it. 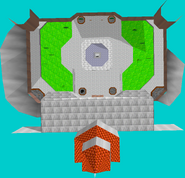 Overhead view of the castle courtyard

This one is an Easter Egg. If you leave him idle long enough, Mario will doze off. (that is, if he isn't submerged, being attacked or inside a poisonous gas cloud)

This is the general level select screen from the game. As you probably know, all levels have similar ones.

Another image of Mario dozing off.

Mario and Lakitu looking at the mirror in the castle's mirror room.

The same room from a slightly different angle.

The hallway leading to the first Bowser level.

Mario standing in front of a star door in the castle's upper floors.

Mario in front of the entrance to the third and final Bowser level.

Wandering around in the castle.

Inside the Jolly Roger Bay room

The painting of the sunken ship from Jolly Roger Bay. You can enter the course by jumping into this painting.

Walking around the room. Aquariums with fish can be seen on both sides of the room.

If Mario turns back at the right side of the room it has a hidden Toad and...

...and the entrance to the Secret Aquarium which can be entered with a backwards or triple jump.