Shifting Sand Land is desert-based portrait world appearing in Super Mario 64 and its remake, Super Mario 64 DS. It is the eighth main course in both the games. It can be found in the basement of the castle, although the entrance to it is disguised as a wall instead of a portrait. This level is called the Shifting Sand Land due to the fact that much of its ground terrain appears to be a type of quicksand. This course is the first one to have its entrance disguised as a wall; it is followed by Snowman's Land. Four Pillars stick out of the ground at different points in the level. Three of these pillars can be reached via sand, while the other one is surrounded by quicksand and must be reached with the Wing Cap or Koopa Shell. The most prominent feature of the level is the great pyramid in the center. Three Power Stars are found inside the pyramid. One of these is in the possession of Eyerok, an ancient spirit which lives inside the pyramid. Eyerok serves as the boss of the level.

Other notable locations include a small oasis (consisting of a palm tree, a small pool of water, and one Red Coin) located in the corner of the stage. A stone gazebo can be found near the beginning of the level, under which are two Goombas and on top of which is a Red ! Block (a ? Block in the DS version), a Koopa Shell in a Yellow ! Block, and a Star Marker. There is also a maze path which rests on top of quicksand and is traveled on by rolling Tox Boxes. This maze is one of a few ways to traverse from the east to the west side of the level. Other ways include a Wing Cap, a Cannon hidden in the maze of the Tox Boxes, and the Crazed Crate at the beginning of the level.

The level also features the first appearance of Klepto the vulture; (in the N64 version, this was Klepto's only appearance, but the DS version had him in multiple levels). Shifting Sand Land is the only course in Super Mario 64, along with Tall, Tall Mountain, where Mario can lose his Cap without the help of the wind.

Star 1: In the Talons of the Big Bird

This level is the same in both the games. While exploring the area, Mario will come to see a large vulture, Klepto, holding a Power Star in its claws. To snatch the Star from its claws, Mario can climb a pillar and wait the buzzard flying over him to do a jump and take away the Star. The other way to obtain the Star consists of taking the Wing Cap to reach Klepto when he's flying high. Once the buzzard is hit, the Star will float over to the left side of the pyramid's main entrance.

It is possible to complete all the subsequent Stars (other than Pyramid Puzzle in the DS remake) by playing on this Star. By doing so, Klepto will be holding the Star the whole time, and as such, will not attack the player.

Star 2: Shining Atop the Pyramid

This level is the same in both the games. This Star requires Mario to get on to the pyramid. This can be achieved by either using a Wing Cap, using a Koopa Shell, or using the Ramp on the far side of the course by long-jumping. Mario must walk on the platforms around the Pyramid to get up to the platform at the top of the Pyramid. The Star is located in a small alcove.

Star 3: Inside the Ancient Pyramid

This level is the same in both the games. Mario needs to enter the pyramid through the main entrance. To get to the entrance, Mario needs to cross the quicksand and go around the course to the pyramid. Then go up the small ramp. He can also fly over the cage-fence by the pyramid to get in.

Once inside, Mario has to go up in the pyramid to reach the Power Star. Mario can go around the perimeter of the inside, or fall into quicksand. On his way, there is a platform surrounded by the quicksand. Mario must jump from there and to the next platform, or get stuck. Afterwords, he will have to go up the stairs and move on right, crossing enemies and even walking across a Grindel. Then he will come up to a bar that must be climbed up to reach the next floor. Once up, Mario should continue on and climb across the cage-bars nearby, leading to large stairs. Then, Mario will meet a large, rolling enemy which he can jump over or hide in a space in the wall to avoid. Once passed, Mario will go up the moving platforms and go across the narrow walkway, then go up a bar and climb it. Mario will then see another Grindel, whom he will have to go under, and then go up the ramp. The Star will be there and Mario can finally grab it.

In this mission, Mario must stand over the four pillars surrounding the pyramid. To do so, the plumber needs to be Wing Mario or use the Koopa Shell to reach at least two of the pillars over a pool of quicksand. The other two pillars can be reached by just running onto them. After Mario has stood atop all the pillars, the top of the pyramid will collapse, revealing another entrance which Mario then enters. This entrance will lead the plumber to the chamber where the fourth Power Star awaits.

However, the Star cannot be gained, yet because Mario has to fight against Eyerok, the monster of the pyramid. In battle, Eyerok will attempt to push Mario off the platform into a bottomless pit, or even try crushing him with its rock hands. Mario must hit Eyerok's eyes three times each to destroy him and gain the Power Star.

An unintended shortcut exists in this level. Mario must go on the platform near the sand duct. He must fall down in the center of the side with the quicksand. If the player tilts the control stick towards the screen, Mario can access the hole that leads to Eyerok. In the DS version, Luigi can make another "shortcut" by going into the normal entrance of the pyramid and then backflip to the orange block to fight the hands. Also, Yoshi can make use of the flame seen in Eyerok's battlefield to attack the boss. In addition, Wario only needs to hit Eyerok's eyes twice, due to his strength.

For this mission, Mario must pick up the eight Red Coins scattered throughout the level. All of these Coins are in the desert surrounding the pyramid. The first Coin is located near Mario's starting point. He must walk a narrow path, taking care not to fall into the quicksand. The second Coin is found inside a Brick Block beneath the raised stone platform near the beginning of the level. Mario must break the block to obtain the Coin. The third Coin is located in the pit of the Tox Boxes. The fourth Coin is underwater in a pool on the side of the pyramid opposite where Mario begins the level. The remaining four Coins are in the air. Mario must become Wing Mario to obtain these. It is helpful to launch Mario from the four pillars at each corner of the pyramid, creating a good distance from the desired Coin. Once Mario has obtained all of the Red Coins in the level, the Star will appear on top of the raised stone platform where Mario found the second Coin.

This level is the same in both games; however, in Super Mario 64 DS, only Mario can be used as he is the only playable character who can fly in the main game. However, it is also possible to complete the mission with Luigi's backflip and using the cannons. It was also moved to Star 7 instead of being Star 5 as Star 5 is replaced by the following mission below.

In this Super Mario 64 DS-exclusive mission, Wario is required to break a hard Brick Block located near to the Cannon in the trap of Tox Boxes, where he reveals a Switch Star beneath the block. However, as Wario has the lowest speed stats among Yoshi, Mario, and Luigi, either the red or green-capped plumbers are the best options to reach the Power Star the fastest. Once pressed the Switch, the Star appears in the Star Sphere located right after the pit of the Tox Boxes and the oasis. In order to reach the Star, Mario can hit a red ? Block to obtain a Cape Feather and become Wing Mario, then using the cannon near to the Switch to fly directly to the spot where the Power Star lies before it disappears. The player can also flutter-jump over the Tox Boxes as Yoshi to the Star or long-jump. To reach the Star with Wario himself, when the Star Switch is pressed, the player have to walk to the plate on the opposite of the cannon underneath the item block which can teleport them near a palm tree near the Star, where Klepto is with the oasis.

This level replaces Free Flying for 8 Red Coins as Star 5.

This mission takes place inside the pyramid. Mario must go up in the pyramid to find five spots marked by a Coin. Two of these spots are platforms near a sand duct, below where the third Power Star was found. Following the sand path, other three spots are located in a duct where the sand moves to the sand pit of the first floor. If Mario manages to collect the Coins in each spot, the Star will appear at the end of the sand duct.

In Super Mario 64 DS, Silver Stars mark these spots and the Star Sphere appears at the sand duct's end. As Luigi, the player can spin from one coin to another, avoiding the sand. Also, one location was changed, so that when the player gets to the very top, they can collect the Silver Star before falling. Other than that, the mission is the same as it is in the original game.

Inside the Pyramid are numerous levels and enemies. There are enemies both unique to this course and ones found in other courses. Unique enemies include Grindels and Spindels. Common ones are Amps and Goombas. Using conventional methods, it can be quite difficult to reach the Power Star at the highest reaches of the pyramid, considering that if one falls, they must start all over again. Occupying a large portion of the center of the pyramid is a large body of shifting sand. In the center of this body of sand is a structure with a passage leading to Eyerok's platform.

The music played when inside the pyramid is the Cave Dungeon theme, the theme used in Hazy Maze Cave and Wet-Dry World. However, unlike Hazy Maze Cave and Wet-Dry World, where a different variation of the theme is played depending on where Mario is, both variations of the theme are played simultaneously. This music is shared with the igloo in Snowman's Land and Wiggler's Cave in Tiny-Huge Island. 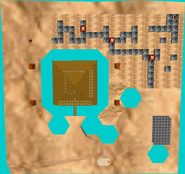 Overhead view of the pyramid in Toad's Tool

For screenshots of the mini-boss room, please visit the Eyerok article.