The ingame Snowmen are living snowmen, that are roughly about Mario's size. They have a round, white body. Same goes for their head, which is slightly smaller and features two black eyes and a frowning, black mouth. Their arms are very thin and black.

The snowmen wear mittens and sometimes also carry a broom with them, though the broom is exclusive to the variant found in Cool, Cool Mountain. Their mittens are yellow with a pink palm, while the broom is a classic, brown broom, with a strawy end.

Snowmen have two kinds of behaviours.

The first one is featured by the snowmen in Cool, Cool Mountain.

It has them hopping around on a set path. These snowmen carry a broom with them. While they don't attack Mario and ignore him, he will get hurt, if he runs into them or if they jump onto him. This will take of two units of health.

The second one is featured by the snowmen in Snowman's Land.

It has them appear from the ground, if Mario approaches them. The snowman will then look after Mario and attempt to throw a snowball at him, which harms Mario, if he is hit by it.

The first kind of snowmen can only be avoided by being swift when passing over or under them. These can't be defeated.

The second kind can be defeated by running in circles around them. Mario has to run around the snowman to make it lose its balance, which will then result in it falling over and melting away.

Coins and similarities to other enemies

The defeated snowman will drop three coins for Mario to collect, so he can gain coins towards the 100 coin star and recover some of his health, if he has lost any.

The running in circles mechanic is the same one, that is used to defeat the Mr.Is and Big Mr.I in the ghost and lava themed levels. 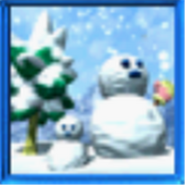 Two snowmen, as they appear in the painting for Cool, Cool Mountain.

A snowman holding a snowball, as it appears on a ledge in Snowman's Land. 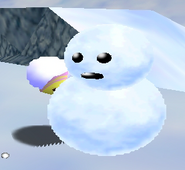 A closeup of the same snowman.
Community content is available under CC-BY-SA unless otherwise noted.
Advertisement