Snowman's Land is the tenth main course found in Super Mario 64 and its remake Super Mario 64 DS. It is the second and final snow-based level in both the games; the other being Cool, Cool Mountain. In order to access this course, Mario (as well as Mario, Luigi, Yoshi, or Wario in the DS version) will have to acquire the second of the castle's keys, and go to the floor directly above the lobby. Inside the mirror room, there will be a blank wall to Mario's left, but if he were to look at the wall as it appears in the mirror, it will show the picture from the level Cool, Cool Mountain. Mario should jump inside, and he will reach Snowman's Land. A cannon appears in this level but the purpose of it is unknown (however, it can be used as an alternative, and possibly easier, method to complete the "Snowman's Big Head" and "In the Deep Freeze" levels). Even stranger, the Bob-omb Buddy who opens it is inside the igloo, so the player cannot see it opening. A similar case appears in Tiny-Huge Island.

In Super Mario 64 DS, there is a Wario painting behind the mirror; to get to it the player must use Luigi, as when he enters the room, two Power Flowers appear (four including the other side of the mirror). Also, the door behind the mirror leads to a secret Power Star. It is also possible to grab the maximum amount of 255 Coins, along with Cool, Cool Mountain, as going in and out of the igloo creates more enemies inside the igloo all over again, and Mario's last Rabbit is running around here.

In the first mission, Mario has to climb the giant Mr. Blizzard. When Mario reaches the ice bridge, the large snowman comes to life and says that something (Mario's climbing) is bothering him (wondering if it is an ice ant or a snow flea). He then starts blowing out of his mouth to try and blow the "pest" away. Mario will be blown off the ice bridge if he steps in front of the continuous breeze and also lose his Cap. The only way to get past is to get help from the penguin walking back and forth on the bridge to block the wind. The penguin, however, walks across, then stops and even walks back a few steps on its way across. Mario can also activate the cannons and carefully shoot up so that he lands on the far left side of the ice in front of the snowman's head. Once the player reaches the other side, the player should continue climbing the mountain, and Mario will reach the Power Star.

In both the versions, Mario can ride on the penguin's head to avoid the wind. In the DS version, Luigi can also perform a backward somersault to spin in midair, and float to the other end of the bridge, while avoiding the wind. Wario can grab a Power Flower, go in the cannon to the tree, and walk on the bridge without the penguin's help.

Star 2: Chill With the Bully

In this mission, Mario must travel and find the Bully walking on an ice platform above a pool of the extremely freezing water. Mario must defeat the bully by knocking it off the small stage and into the water (identically to how he defeats the Bullies in Lethal Lava Land). Once the player has defeated it, a Power Star will appear in the middle of the platform. In the DS version, Wario and Yoshi can both use their metal/fire abilities to simply walk into/spit fire at the enemy, respectively.

On a side note, falling into this water is equivalent to falling into lava, which will take away three health points from the player (four if the player does not have their Cap on). The warning sign is located at a side of this fatally cold lake.

Once entering the course, Mario should take a look to his left. He will see an ice structure. Inside, he will also see a Power Star. The player should inspect the sculpture and find a way in. After navigating through it, Mario will finally reach the sStar. Mario can also obtain the Power Star by using the cannon or by triple-jumping on the slanted part of the ice sculpture.

In the DS version, the mission has been replaced by the following mission.

For this Star, Yoshi is needed. Players must go left from the start where they will see an ice sculpture of cubes. The players need to use Yoshi's Power Flower to melt the ice blocks. One of them contains the Power Star, so Yoshi needs to melt that block.

Star 4: Whirl From the Freezing Pond

This time, Mario should travel to the other side of the level where there is a small pond with freezing water. Unlike the freezing water below the Bully, Mario can swim in this water, but will take an extra point of damage, regardless whether if his head is above the water or not. The player should walk the small path and then see a large wall across the water. Using a Spindrift to Spin Jump, Mario can fly over the wall and find himself in an area with two boxes. One of them contains the elusive Power Star. In the DS version, the player can also use Hoot the owl, Mario's triple-jump, Yoshi's flutter-jump, or Luigi's backwards-somersault to get there.

Following the same path as in the previous mission, Mario should find himself near the two yellow blocks. The box that doesn't contain a Power Star will hold a Koopa Shell. While riding this shell, Mario is able to travel over the water making him immune to the water's effect. Two Red Coins are located on the snow wall to the right of the shell's location. To find the other Coins, the player should travel around the rest of the course collecting the rest of the Coins. Once all eight have been found, the Power Star will appear above the Star Marker near the entrance of the level.

In Super Mario 64 DS, this Star is replaced by the following mission, as well as Red Coins in the House.

This mission is similar to Shell Shreddin' for Red Coins, except now there are five Silver Stars. Some of the elements are also different and there locations from Super Mario 64 have been eliminated. Mario, Luigi, Wario, or Yoshi should do the same thing; hop over the freezing pond, locate the box with the Shiny Shell and collect the Silver Stars located throughout the course. The Stars themselves will appear in five out of the eight areas the Red Coins appeared in the original version appeared. The Star will then appear in the Star Sphere, roughly around where the 8-Red-Coin Star was in the original game.

Star 6: Into The Igloo

In this mission, Mario must navigate his way to get the Star from the igloo. To find the igloo, Mario needs to go behind the freezing pond where the shell was found in the previous mission. Once again, he needs to hit the Yellow ! Block on the right side and get on the shell that comes out of it. Then he needs to go back to the pond where he will see a steep slope with Coins on it. He can't normally reach there, but because the shell can go up steep surfaces, the plumber can go up. Afterwards, Mario will have to jump over the fence and crawl into the small tunnel leading to the igloo.

But the mission still is not done after that. Mario will see a star on a wooden platform, but it is encased in ice, so he can't get it yet. To go through ice, Mario will need to get a Vanish Cap and go through it. He will have to maneuver through the igloo until he reaches the top right corner were a Blue ! Block is found with the Cap inside it. Mario needs to simply jump over the ice wall and get the Cap. Since Mario can go through ice when invisible, he will need to go over to the Star and grab it in the ice.

In Super Mario 64 DS, the interior is completely different and much larger, therefore, the Star is reached differently. The player will need Luigi and enter the igloo. Then the Star can be found under a caged floor. Luigi will need to go to the top left corner to get a Power Flower and turn invisible. Then he must simply go through the floor and grab the Star.

This mission is the Red Coin mission which is used to replace Shell Shreddin' for Red Coins, which was replaced by Snowman's Silver Star. Here, the player will need to enter the igloo. Above some icy water in the igloo, the player must grab all the eight Red Coins in this Super Mario 64 DS-exclusive level. Many enemies are scattered inside the igloo, so the player should avoid them and the icy water below. After collecting all the eight Coins, the Star will appear on the right side of the igloo.

The beginning of the level.

Running and turning around will cause Mario to skid across the snow for a show distance.

If the player turns around, they will come across a few Spindrifts, a Moneybag and some coins, but most importantly...

Pushing forward instead, will cause the player to come across a Snowman and allow them to explore the rest of the level.

A snowy area with pools of ice water is found after jumping over a small dune made of snow.

Mario comes along a Spindrift. If he makes contact with this enemy, Mario will lose two points of health.

In the general area around there, a lone Chill Bully and a Red Coin can be found.

The Chill Bully can be fought to gain the Power Star of the mission "Chill with the Bully".

If the player climbs the giant Snowman instead, the snowman will exclaim, that Mario is a "snow flea" and attempt to blow him away. The player has to move in sync with the Big Penguin to avoid the Snowman's breath.

Mario collects the Star on top of the giant snowman's head in the mission "Snowman's Big Head".

Luigi facing off against Chief Chilly in the mission "Chief Chilly's Challenge". Chief Chilly and his challenge are exclusive to the remake. 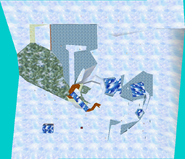 Overhead view of the outdoors area.

Full display of the Giant Snowman. 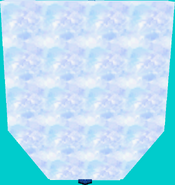 Overhead view of the box, the indoors maze is contained in.

Entry to the maze, as it appears in Toad's Tool.