Despite their feminine appearance, their original, Japanese name Fuwafuwa-san (aka "Mr. Fluffy") indicates, that they are in fact male beings.

Spindrifts are unusual creatures roughly about Mario's size. They have a round, white head with two beady black eyes and a mouth. They wear a pink flower on top of their head which constantly spins, hence their name. The rest of their body consists of what appears to be a yellow dress with a green collar. The left and right points on their collars protrude outwards.

It is unknown if the left and right strands of their collars also function as arms, since they share a similar appearance but the Spindrifts never use them.

In the DS Edition, their head has been changed from white to a skin-colored apricot.

Spindrifts seem to be attached to cold climate as they only appear in the snowy worlds in the games:

Spindrifts have no attack other than trying to bump into the player.

When Mario is out of sight Spindrifts will aimlessly wander around their spawn point. If Mario approaches them, they will quickly turn around to face him and slowly levitate towards him.

However, they will sometimes ignore Mario altogether and keep wandering around despite his proximity to them.

How to deal with them

The player can defeat a Spindrift by using pretty much any of their jumps or basic attacks. A single hit will take it out, but if the Spindrift was defeated by jumping onto it, it will grant the player an extra boost into the air. This boost is very similar to a double-jump. Upon reaching the height of the boost, the player will gradually fall back down while spinning. This feature is useful for reaching areas that are hard to reach on foot (such as the upper pathway in Snowman’s Land)

Coins and Similarities to other Enemies

Once the Spindrift has been defeated, he will drop three regular coins.

The special effect, that allows Mario to perform a spin jump in mid-air is shared by another, albeit aerial, enemy. This other enemy type is the Fly Guy, which appears in a variety of levels. 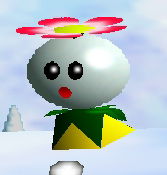 A Spindrift as it appears from the front.

The same Spindrift when viewed from the side. 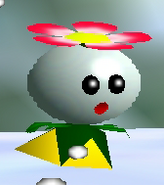 Now walking into the other direction as seen from the front.

The Spindrift as it appears alongside Mario. A Moneybag can be seen hopping around in the background.

The Moneybag, Mario and the Spindrift together. A silent moment, which shows these creatures' occasionally docile behaviour alongside Mario.

Another screenshot shows the Moneybag and the Spindrift doing a little dance together.
Community content is available under CC-BY-SA unless otherwise noted.
Advertisement