This page is for listing things present in the beta or early versions of Super Mario 64.

Before Charles Martinet was going to voice Mario, Nintendo used these in the 1995 beta prototypes as placeholder voices. Mario's original voice was much different. His voice sounded much higher pitched, almost un-human, but the voice did sound somewhat more playful. You can listen to it below.

During the earlier stages of the beta, instead of Mario's more modern head, a head that looks strikingly similar to Paper Mario's head was used as the life meter (This may of inspired the first Paper Mario, as the beta was many years before Paper Mario came out).

Take note of the life icon in the red circle.

super mario 64 beta castle
Add a photo to this gallery

Originally, there were two Chill Bullies, one large and one small. The small one was eventually removed. 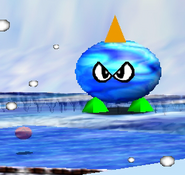 The same location from the final game lacks the smaller Chill Bully. Only the large one remains.
Add a photo to this gallery

The first design of Mario's Health Meter had a clock like mechanic rather than pie pieces, and an arrow pointing to his health. The number of his health also was there instead (i.e. 5, 6, 2, etc).

The second design looked a bit more similar to the final. However, it lost health clockwise (instead of counter-clockwise like the first and final meter). It also had a "POW" which stood for POWER.

The third meter looks identical to the one used in the final game.

The fourth and one seen in the final game was likely implemented in the twilight stages of the beta or near the last second.

The Meter is in the center. (Ignore the red circle around the Mario head)

A screenshot from the final game.
Add a photo to this gallery

Throughout the beta, the settings of the game were very, very different compared to the final version.

Princess Peach's Castle had very few windows unlike the final version, and Peach's portrait on the front wasn't present, instead there was a clock in the beta.

The interior though (at least the lobby) was much different. The walls were painted dark with moons and stars, the stairs in the middle were platforms instead of stairs, and many of the rooms looked different. When Mario went through doors the camera was on an angle instead of behind him. You did not need stars to enter doors, most likely so test players could try out stages faster.

Cool, Cool Mountain and Lethal Lava Land also had different layouts and graphics, but other than that, they are easily recognizable to their final counterparts.

The interior of Peach's old castle.

An early Cool, Cool Mountain. Notice the difference in the Mother Penguin's appearance.

An old Lethal Lava Land.
Add a photo to this gallery

Along with the graphical design, characters were somewhat different too.

Mario did not look much different than his final counterpart, but his hair and Cap used to be more pointy in the beta.

Mario in the beta.

Mario in the final.
Add a photo to this gallery

Big Boo in the beta.

Big Boo in the final game.
Add a photo to this gallery

Mother Penguin had a somewhat different design, as she had a slightly different body and head. It is unknown why she is sad in this screenshot of the beta.

Thwomp's may of had the largest difference. They were a darker shade of blue in color, and had more menacing/daring faces.

The old Thwomps. Notice the different eyes and mouth.

A Thwomp in the final.
Add a photo to this gallery

Bowser had practically no differences, but he did have blue eyes in the beta, his shell had a different design and his roar was more high-pitched.

A beta version of a Bowser Battle.

Bowser breathing fire in the final game.
Add a photo to this gallery
Retrieved from "https://super-mario-64-official.fandom.com/wiki/Super_Mario_64_Beta?oldid=8404"
Community content is available under CC-BY-SA unless otherwise noted.