Tall, Tall Mountain is the twelfth main stage in Super Mario 64 for the Nintendo 64 and its remake Super Mario 64 DS for the Nintendo DS. It is one of the largest structures in the game, and will have Mario traversing to the top of it in many missions. The painting to the course is located in the foyer of the castle's second floor opposite the painting to Wet-Dry World. It is the smallest painting that leads into a course. It features a high mountain with all kinds of obstacles on the way to the top. The hat stealing monkey Ukiki is featured here as well as the blowing cloud enemy named Fwoosh. The dangerous aspect of the level is that almost the entire path around the mountain is thin and near a cliff face. Like its painting, also located on the second story of the castle, Tall, Tall Mountain is surrounded by Giant Mushrooms, one of which has a Power Star. The top of the mountain has a flat surface and railing, and is next to a waterfall that leads to the start of the level. This is the only main course in the DS version that has neither a Switch Star nor Silver Stars.

To get this Star, Mario must climb to the top of the mountain. He will begin by going right of the small waterfall at the start of the level and go across two large gaps. If he falls through the first gap, he will still land on a lower part of the mountain and be able to climb up the side, but the second gap leads into the abyss. Mario will then be running along the edge of the mountain with Mushroom platforms on his left until he finds a fork-in-the-road around the Monty Moles.

Mario will then travel around the edge of the mountain. Later, he will have to long jump across a long waterfall which contains a later mission and balance across a thin walkway. After that, Mario must simply make his way up and grab the Star.

Star 2: Mystery of the Monkey Cage

To acquire this Star, Mario must again trek to the top of the mountain, or hitch a ride with Hoot the Owl, where there will be an Ukiki. Mario must catch it, and, when prompted, let him go. Mario must then follow it to a cage containing a Star. The Ukiki will break the cage, and the star will fall. Mario must head back to the area where the other Ukiki is to get it. In the DS version, Luigi and Wario must do the same, but Yoshi can eat it.

To get this Star, Mario must find the Mushroom platform area where the straight-stemmed Mushrooms are at the beginning of the stage and carefully collect all the Red Coins there. He must then carry on slightly further around the mountain to the area with the Monty Moles, and find the rest of the Red Coins there. They are scattered along the wall with rock platforms to reach them. After all the Coins are collected, the Star will then appear on the Star Marker across that area on a Giant Mushroom.

To acquire this Star, Mario must find the entrance to a secret slide. It is near the top of the mountain by a cloud enemy, Fwoosh (who can blow Mario off the mountain). If Mario walks up to the wall, it may move a little like a painting would. He should jump into it and get into the level.

Mario will find himself in a building with a large slide on it. This slide is noticeably more difficult than the The Princess's Secret Slide and has many curves and jumps. Also, near the beginning is a fork-in-the-road, and if Mario chooses the wrong road, he will fall off the slide and lose a life. At the end of the slide, Mario will go through a hole that will lead him to the Star that is located behind a mesh on the side of the mountain.

If Mario loses a life from falling off the slide and returns to Tall, Tall Mountain through the painting, he would automatically end up at the start of the slide again, thus not requiring him to go all the way up the mountain from the start, unless he lost all his lives.

It is possible for the player to skip the slide by jumping and then kicking in the air while pushing the stick backwards the direction Mario is facing to get the Star. Nintendo tried to prevent this in the DS version, but it is still possible to do it using Luigi's invisibility power.

This Star is located a fair way up the mountain, behind the waterfall at the spot after the Fwoosh is found. To access it, Mario can either long-jump to it, or use the Switch further up the mountainside past the grassy area with Goombas on it to create some wooden platforms to the falls. Mario must quickly run before the platforms disappear and grab the Star.

In Super Mario 64 DS, the Star is under a Black Brick that only Wario can break. The switch was also removed, and a brown, wooden bridge can easily let Wario walk to the Black Brick. This mission was also moved to the seventh Star in the DS version. Also, this mission was originally known under the slightly shorter title Breathtaking View from Bridge in the original game, whereas it is known as Breathtaking View from the Bridge in the DS version.

This Star is situated on a large, isolated Mushroom, away from the mountain. It can be accessed five ways. Shortcuts involve long-jumping from the top of the mountain, jumping on a Fly Guy and twirling onto the Mushroom, using Hoot the Owl, blasting from the cannon, and using the Wing Cap. The cannon is under the island that can be reached by a secret portal on one of the smaller Mushroom platforms. The portal will take Mario near a very thin walkway for him cross. When he gets to the end of the walkway, the cannon will be in front of him. Mario must carefully aim and grab the Star in mid-air. Mario can also get to the Mushroom, with the Wing Cap.

In the DS remake, the player can also use Luigi's backflip and Yoshi's flutter-jump from the top. In addition, the path is less narrow than in the original version. This Star was also moved to Star 5.

This Star is exclusively added to Super Mario 64 DS, for the sixth Star. To access it, the player has to either have Mario collect a Wing Cap at the top of the mountain or make use of Hoot who can be found in a tree at the beginning of the course, but Luigi can backflip. The objective is to fly through the five Coin rings in the sky. The Star will then appear on the summit.

This gallery contains high quality screenshots of the Tall, Tall Mountain main area and its three slide sections. These screenshots were created in Toad's Tool. 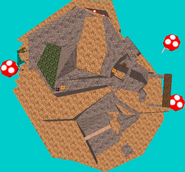 Overhead view of the main area. 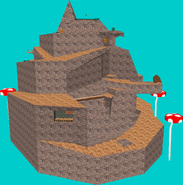 Sideview of the main area.

Sideview of the first slide section. 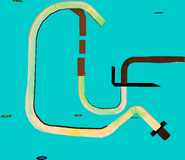 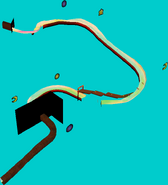 Sideview of the second slide section. 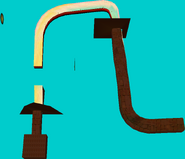 Sideview of the third slide section.
Community content is available under CC-BY-SA unless otherwise noted.
Advertisement