The Princess's Secret Slide is one of the secret levels in Super Mario 64 and Super Mario 64 DS, as well as being one of the three slides in the games. Only 1 Power Star is needed to access the level. The entrance to the course is on the first floor, atop the central staircase, of Princess Peach's room of her castle, behind the door marked with a "1" on the mezzanine. Inside the room are three stained glass windows with images of Princess Peach on them. Jumping into the one on the right will lead to the slide.

In the DS version of the game, the room is expanded to include the locked doors with the other characters behind them, as well as a white door which can only be unlocked after catching eight Glowing Rabbits, and the number of stained glass windows was reduced from three to two, but the stained glass window on the right will still lead to the slide. Additionally, if the player falls off the slide, they will be brought back to the lobby of the castle, with no life lost. Like other secret levels, the player can lose a life by taking damage until it reaches zero. In this case, the only way to take damage is to jump from the first part of the slide to the second part of the slide, resulting in damage due to falling from heights. Also, in the DS version, it is one of the four courses in VS. Mode. The first Power Star is at the start, the second is in the middle of the slide, and the last three Power Stars are in the ending room. The end of the slide is the best place for fighting. This is the only secret course in both the games that contains Blue Coins and the only secret course in the original game that has no Red Coins.

The player starts in a room with a Blue Coin Block to the right. Once the player enters the slide ahead, a timer will begin. The slide will first take the player down a large tunnel, which leads to a steep downward slope. After a large 270° bend are a series of drops with a 1-Up Mushroom in this area followed by several bends, ultimately leading to the end room of the slide.

This secret stage has two Power Stars to collect, and it is the only stage in the original game to contain two of the Castle's Secret Stars.

The player must ride the slide all the way to the bottom and hit the ! Block to collect the Power Star.

This second Star will only appear if the player reaches the bottom of the slide in under 21 seconds. This Star will appear in front of the ! Block that previously contained the first Star.

The music that plays in the course is a variation of Bob-omb Battlefield's theme (also the main theme of the game), as well as Cool, Cool Mountain's music, involving a Western style, with an instrumentation of a fiddle, a bass, drums, a piano, a banjo, and whistling. This music can also be heard during the races with Koopa the Quick, and in most other secret courses, in secret areas that involve a slide, and in other regular courses such as Tick Tock Clock and Rainbow Ride.

This music has since been arranged in multiple future titles in the Mario series, including the Super Smash Bros. series; Super Mario Galaxy 2 in the Tall Trunk Galaxy mission "Tall Trunk's Big Slide" and in the Rolling Coaster Galaxy; Paper Mario: Sticker Star during the mine cart sections in Bowser's Snow Fort; Super Mario 3D World while riding Plessie[1], which was reused in Captain Toad: Treasure Tracker during part of the Coins Galore minigames; and Mario & Sonic at the Sochi 2014 Olympic Winter Games and Mario & Sonic at the Rio 2016 Olympic Games as one of the tracks that can be played in events, which is Toad's theme in the latter game. The original song is also featured in Super Smash Bros. for Wii U and Super Smash Bros. Ultimate.

There are three pictures in this hidden room. Mario has to enter the one on the right side to enter the secret slide level.

The beginning of the level.

Mario looking back at the racing track after finishing the race.

The stage with the levitating yellow ! box.

If Mario break the box, he gets a Star from it. 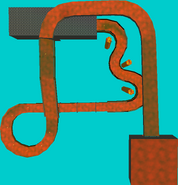 Overhead view of the area.

"When you slide, press forward to speed up, pull back to slow down."

"If you slide really fast, you'll win the Star!"