The Secret Aquarium is a secret location in Princess Peach's Castle in Super Mario 64 and Super Mario 64 DS and this level can be found underwater. 3 Power Stars are required to access this level. This area is one of the few areas that cannot be seen by going through a painting. The Red Coins are found in the bottom corners and halfway up the wall between each of corners. The Secret Aquarium can be found in the 3-Star door in the room of the castle with the Jolly Roger Bay painting in it. When Mario enters, he must walk forward a little bit, then turn around. Mario will see two black squares on the top right corner of the wall and the top left corner. The one on the right has a 1-Up Mushroom in it, while the right one has the Secret Aquarium.

The Secret Aquarium is a large fish tank filled with water. There is no place for the player to surface for air, so they will have to collect Coins in order to avoid the player from drowning. There are bubbles that give the player more air in the depths of the water, and they are vital to his success of getting the Star. There are 40 Yellow Coins in rings with 8 Red Coins in the center of the rings and on the room's floor.

While not physically changed in Super Mario 64 DS, the course features music absent from the original game: the full percussion version of the Jolly Roger Bay and Dire, Dire Docks themes.

Inside the Jolly Roger Bay room

The painting of the sunken ship from Jolly Roger Bay. You can enter the course by jumping into this painting.

Walking around the room. Aquariums with fish can be seen on both sides of the room.

If Mario turns back at the right side of the room it has a hidden Toad and...

...and the entrance to the secret aquarium which can be entered with a backwards or triple jump.

Once inside the secret aquarium, Mario has swim around and to collect 8 the Red Coins to get a Power Star. 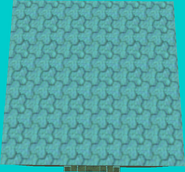 Outer box of this room as seen in Toad's Tool.

One of the platforms and the floor of this room.