They are not to be mistaken for the tall, greyish Whomps.

Thwomps are large, square, dark blue creatures that appear to be made of a type of stone. They have angry eyebrows (similar to Goombas), and white eyes with red pupils.

Thwomps only have a single attack, which is trying to crush Mario, Luigi, Wario, or Yoshi when the latter is beneath one of the Thwomps. Although it seems weak, a successful hit on they player does deal a considerable amount of damage, so players should take caution near Thwomps.

If the player manages to get some high ground by, for example, climbing up a stair of the staircase seen in Whomp's Fortress next to a Thwomp, the player will be able to jump on top of the Thwomp by making a sidewards sommersault after the Thwomp has landed on the ground.

This way, the player is able to ride on top of the Thwomp which can be used as an elevator to give the player additional height, so he can reach higher up places with his jumps, which couldn't be reached otherwise. 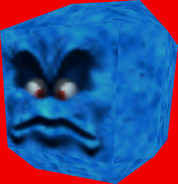 The Thwomp's ingame model from the original Super Mario 64.

The Thwomps in Whomp's Fortress, as they appeared in the beta of Super Mario 64.

The same Thwomps in the final game, if Mario approaches them from behind by running up the ramp on the other side of the level.

One of the Thomps as it is seen, when Mario choose an alternate, more difficult path featuring bottomless pits instead.