Tower of the Wing Cap

Tower of the Wing Cap (also called Wing Cap Course in the original game and ? Switches of Rainbow Tower in the DS version in the messages that appear upon first entering the course) is a castle tower in the sky that contains the Wing Cap Switch, appearing in both Super Mario 64 and Super Mario 64 DS. It is available once 10 Power Stars (14 in the remake) are collected. The entrance is located on the first floor of Peach's Castle. Once that is done, the sunlight will be shining down from the ceiling onto the rug in the center of the room. If Mario stands in the sunlight and looks up, he will be transported to the level. The cloud pattern on the ceiling can also be seen on the second floor in normal paintings that Mario cannot enter, and even later in the entrance holes of Rainbow Ride and Wing Mario/Over the Rainbows. Although the sunlight will disappear once the Red Switch has been activated, Mario can still return to the level by standing in the same spot and looking up. In Super Mario 64 DS, the area was retitled ? Switch.

In Super Mario 64, Mario will immediately appear in flight as Wing Mario. Upon landing on the tower, Mario will be able to press the red Cap Switch, which in turn will make all the Red ! Blocks solid. A Power Star can also be found here after the player collects the 8 Red Coins. This is the only location that Mario enters as Wing Mario; in other courses, he must collect a Wing Cap from a Red ! Block and either launch from a cannon or triple-jump to take off.

In Super Mario 64 DS, the Red Switch is changed from a ! Switch to the namesake ? Switch, which likewise activates all of the ? Blocks in the game. However, the feel of the level more or less stayed the same. In addition, only Mario is granted with Wings upon entering the stage as he is the only charcater that can get Wings in the main game; if any characters other than Mario access it, they still flip as they normally do during a course intro, but plummet into the abyss which promptly transports them back into the castle. If the player falls below the stage, they will be returned to the castle with no life cost. When Mario accesses the ? Switch course for the first time, it is mistakenly described as the "? Switches of Rainbow Tower" despite only one such Switch existing in this version.

There is only one Power Star to collect in this area. Using the Wings that he is granted upon entering the level, Mario must fly around the area and collect the eight Red Coins floating in the air in the four compass directions. The Red Coins are found in groups of two. Due to the fact that Mario slowly loses altitude while flying, he will have to re-enter the level and try again if he drops below the point the Coins are at. Additionally, each pair of Coins going counterclockwise starting from the Eastern side of the tower is lower than the last, meaning that it is most efficient to start with that pair while going in that direction. Once all the Red Coins are collected, the Power Star will appear at the Star Marker on the tower.

References to other games 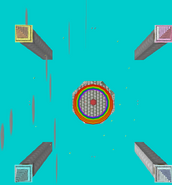 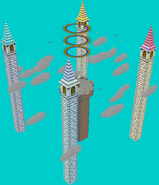