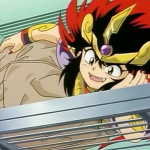 aka Zenki the crimson Thunder

This is mah user page.

I am the founder of E.V.O. Search for Eden Wikia, but I am also found doin' stuff over at Kishin Douji Zenki Wikia where I'm a mascotz of da wikiz and an admin.

Freddy is a good friend as well.

This wiki and me and mah friends leaving FANDOM

Back in the past, I helped out a lot at this wiki, but in the most recent time, I haven't been too active here and, just like Seme and Freddy said, this wiki has been pretty much dead for quite awhile now.

Seme told me, that she had updated her userpage to reflect this, so I decided to do so as well.

So... Yep. You can still contact me at mah message wall over here, but you won't find me being too active at any wikis right now, cause of Seme and mah other friends preparing our move to our new WikiFarm, which won't be part of FANDOM.

I'm already very excited and seeing Seme makin' progress on workin' on our new farm and migratin' our stuff always cheers me up and makes me look forward to a better future, where we can all have funny memes and work on our wikis without anyone forcin' pointless changes onto us.

Seme also contacted Goki, so once it's online, he'll prepare a build of the alternate forum, he created for our other wikis, so we will have forums again instead of discussions over at the new place!

The only thing, that makes me sad, is, that I can't help Seme right now, cause the stuff she's workin' on is too complicated for me and I would only end up distracting her when she works on the new farm.

That's all of now, so see ya at the new farm, once everything's ready!

I'm the founder of the following wikis

I'm also an admin at the following wikis

I'm a regular user at these wikis

Retrieved from "https://super-mario-64-official.fandom.com/wiki/User:Zenki7?oldid=7117"
Community content is available under CC-BY-SA unless otherwise noted.