Whomp's Fortress, also known as the Whomp King's Fortress, is the second main level in Super Mario 64 and its Nintendo DS remake Super Mario 64 DS, and can be accessed via a painting on the first floor of Princess Peach's Castle. Only one Power Star is needed to open the door to the painting. In the DS version, one of Wario's Rabbits can be found in the entrance to the level.

The Whomp King rules the castle and its inhabitants which consist of Whomps, Thwomps,bomps Piranha Plants, and a lone Bob-omb Buddy. It is a also a giant floating fortress. Many obstacles and difficulties are found here.

Whomp's Fortress was recreated in the Wii video game Super Mario Galaxy 2 and renamed the Throwback Galaxy. The music was recomposed and the graphics were redone to fit the Wii's standards.

This mission is unchanged between both the games. For the first Star, Mario has to defeat the Whomp King who is standing on a flat platform on top of the fortress. On his way to the top, Mario is hindered by several platforms which move away from his feet, as well as Whomps, Thwomps, Sliding Stones, and sleeping Piranha Plants which awake when Mario runs rapidly past them. However, there is a Metal Cap available to make Mario temporarily immune to those enemies after he has already found the switch. A Power Flower is available in the DS version in place of the Metal Cap. If Mario hits this block, (regardless he has his Cap on or not, like in Jolly Roger Bay) however, a Bob-omb will come out and explode almost immediately. To defeat the Whomp King, Mario has to trick the King into falling down to try hitting Mario. Mario can then jump on the Whomp King's back and ground-pound on the adhesive tape on it. Once Mario does this three times, the Whomp King will explode, releasing his Power Star. The level name is a pun on the famous expression "A Chip Off the Old Block".

Star 2: To the Top of the Fortress

This level is unchanged between both the games. The second Power Star is located on top of a tall tower which has appeared after the Whomp King's defeat. When Mario has climbed up to the flat platform as before, he will find a Bill Blaster shooting Bullet Bills at him. Mario has to use ledges around the tower to get to the top and to get the Power Star. Under certain conditions, Hoot the Owl can be used to easily fly to the top get this Power Star. He can also use the cannon to fly up to the platform which rises to the top of the tower.

Star 3: Shoot Into the Wild Blue

This level is unchanged between both the games. After jumping from the tree at the starting point, cross the water basin to meet the level's Bob-omb Buddy. With the nearby cannon, he has to shoot himself onto a ledge on the wall of the fortress, aiming for the far back pillar of the platform, where several Coins and a Power Star are found. It is also possible to jump onto the ledge (by jumping on the wall and then on the ledge) to get the Star. In the remake, this platform can be very easily accessed by performing a backflip with Luigi on the platform above, and spinning to the Power Star. Mario can also triple-jump up to the wall next to the Power Star from the platform below, and then wall-jump to the platform.

This is the Red Coin mission of Whomp's Fortress. Several other Red Coins are found on top of a Thwomp and on a 'slide'. To get to the floating, spinning islands, Mario first has to kick down a giant plank of wood to build himself a bridge. However, it is easier to just get Hoot out of the tree at the starting point and simply fly and drop to the floating islands. The Power Star itself is located near the start of the level, next to two logs of wood. The first two are on the floating islands. Another is above the second sliding stone. Three more are near the Piranha Plants: one behind the first, one on the skinny ledge, and one obtained while riding the moving platform. However, in the DS version, the previous Red Coin is on the new area of land that connects the whole course together, between three Piranha Plants in a flower patch.

Star 5: Fall Onto the Caged Island

This Power Star is located on one of the floating isles near the tower, which has a large cage surrounding it. As the name implies, the player is intended to use Hoot to fly up and land inside the cage to collect the Power Star.

While the gameplay is the same in both the games, the island is much larger in the DS version, with the Power Star inside a smaller cage that only has an opening on one side, meaning that the player can no longer directly land on the Power Star.

Star 6: Blast Away the Wall

This level is unchanged between both the games. For the sixth Power Star, Mario has to use the cannon on the left of the starting point from Star 3 again and blast himself against the wall edge on the far right. The wall will crumble away and release the Star. If he hits the wall on the left, the wall will crumble like the other one, but nothing else will happen.

Super Mario 64 DS adds a seventh exclusive-mission to Whomp's Fortress. In this mission, Mario, Luigi, or Wario have to find the Switch Star on the new area of the fortress that is not present in the original game. The Switch is hidden by a Brick Block. After hitting the switch, the player must run to the other side of the fortress along the new grassy area to collect it before the timer runs out, or else the Star will disappear and they have to do it all over again. Yoshi cannot do this mission since he cannot destroy bricks unless he uses one of the Caps.

A near-perfect replica of Whomp's Fortress appears in the game Super Mario Galaxy 2 as the Throwback Galaxy. The graphics have been redesigned, the music has been recomposed, and the level layout is basically the same with some minor differences, such as a Midway Point at the top of the fortress, Star Bits around the level, a Chance Cube near the beginning, and the removal of Hoot. The floating isles were removed, although a bonus planet was added, most likely replacing the said islands. Unlike the original, the walls are automatically blasted away, suggesting Mario revisits the same place as in Super Mario 64. Also suggesting this is the fact one Bob-omb Buddy says Mario/Luigi looks familiar. This is probably because he has seen him in Super Mario 64 or, in the case of Luigi, its DS remake. Also, the player fights a Whomp at the top of the fortress, as opposed to the King himself, then drops down to the underside of the planet to fight the Whomp King. This difference was to probably trick players of the original game into thinking that he was the Whomp King, as Whomps had been greatly increased in size to be almost identical to Whomp King, while the King was made even bigger.

The first few moments into Whomp's Fortress. A sleeping Piranha Plant can be seen in the foreground.

There's also a short tutorial about the activation of the Cap Blocks. These Caps give Mario special abilities.

Further into the level, Mario meets the first Whomp.

After climbing all to the top, Mario meets Whomp King who is mad at Mario for stepping on his friends.

After defeating Whomp King, he will have a short defeat speech (just like King Bob Omb before him) and get another Star!

Mario gets the Star!

In another mission, Mario has to climb a smaller tower (which appeared on top of Whomp's Fortress).

After reaching the top, Mario can collect another star.

There's also a mission where Mario can scare an owl out of the starting area's tree.

The owl's help is needed to get another star in the sky which would otherwise be unreachable for Mario. 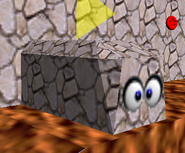 a bomp, an enemy in this level