Wiggler is a boss found inside the mountain of the huge island version of Tiny-Huge Island.

Wiggler is a big, yellow-orange caterpillar with a large brown nose, two beady, black eyes and a flower on the back of his head. He has eight orange legs and wears four pairs of red shoes. Wiggler is about twice as tall as Mario.

Unlike the cute and timid expression of his Nintendo 64 counterpart, the remake's Wiggler already has an angry expression from the get go.

Behaviour and how to deal with him?

Wiggler will start out in his friendly state and walk around the boss arena in an attempt to walk into Mario, Luigi, Wario, or Yoshi. If he succeeds, they will lose 2 units of health.

Using the ground pound on Wiggler and hitting him anywhere, will cause him to stop and complain to the player. Afterwards, Wiggler will rise on his hind legs and make a short leap at the player, then he walks faster then before.

Stomping Wiggler on his head causes him to turn to his furious state and complain to the player once again. Now Wiggler will rise again and keep moving faster.

Stomping him on his head another time will cause Wiggler to return to his friendly state and cause him to give up. Now Wiggler is defeated and will reward the player with a Power Star.

He also shrinks in size and is now only half as tall as the player. The defeated Wiggler will walk around peacefully and doesn't hurt the player, if he comes in contact with him.

If Wiggler walks around long enough, or the player pushes him too far, Wiggler falls through the mesh of the metal net beneath him sometimes, causing Wiggler to fall into the infinite void of the bottomless pits below. 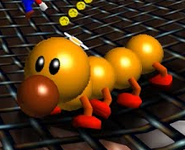 Wiggler, as he appears in Super Mario 64. 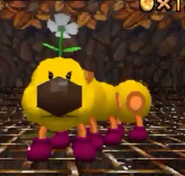 Wiggler, as he appears in the DS remake.

Mario and Wiggler as they appear in the DS remake.

Note, that Wiggler from the Nintendo 64 version doesn't have a visual furious state. He will behave the same as his counterpart from the DS remake, though.

Community content is available under CC-BY-SA unless otherwise noted.