View source
watch 01:54
Obi-Wan Finale - The Loop
Do you like this video?
Play Sound

Yoshi (full name "T. Yoshisaur Munchikoopas") is a green dinosaur and ally of Mario, Luigi, and other friends in the Mario series. He makes an unplayable cameo appearance at the end of Super Mario 64 and is the first playable character in Super Mario 64 DS.

Yoshi is a green dinosaur with white skin on his stomach and lower head. He has a red shell on his back which in other games Mario and Luigi use to ride on him. He has three orange spikes on the rear of his head. He wears brown shoes with yellow bottoms. He also sports a long, red tounge with a very similar appearance to that of a frog.

In Super Mario 64, once Mario has collected all 120 Power Stars, a cannon near the lake will open. If Mario goes inside it, he can be able to shoot up to the castle roof. Up here are three 1-Up's and Yoshi. If the player talks to Yoshi, he will say:

Talking to Yoshi will refill Mario's Health Meter and give him 100 lives. After that, he'll jump in to the waterfall.

In Super Mario 64 DS, Yoshi's role has been entirely changed. After Mario and his gang go missing, Lakitu wakes up Yoshi and persuades him to find the three missing plumbers.

Yoshi has to collect 8 Power Stars before he can go and rescue Mario by defeating Goomboss in Goomboss Battle. Once Mario has been rescued, he can be continued to be used or can be switched with Mario or the other plumbers. Note, Yoshi cannot free the other plumbers until they have been freed at least once by a certain plumber (Mario must save Luigi, Luigi must save Wario).

Yoshi is the weakest of the four characters as he can't punch, kick, grab enemies/objects, destroy Bricks without a Super Mushroom, and defeat Boos. However, he is able to stick out his tongue and eat enemies like Goombas with it. If he spits it out, the enemy will die. If Yoshi swallows it, then an egg will be made, which can be thrown at enemies or breakable objects. He has average speed at both running and swimming.

Yoshi can also spit fire if given a Power Flower. This can kill enemies and melt ice, if present.

The last ability is Yoshi's flutter-jump, where he has the highest jump in the game. If the player holds the jump button, which is B, Yoshi will flutter in the air briefly. This is helpful when Yoshi needs to cross long gaps.

Yoshi as he appears at the rooftop of Peach's Castle.

Yoshi walking around at the rooftop after Mario has talked to him. 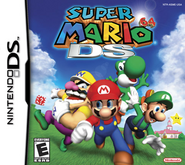 Wario, Mario, Yoshi, and Luigi as they appear in the box art of the remake.
Community content is available under CC-BY-SA unless otherwise noted.
Advertisement